Like its predecessor, R.W.R. McDonald’s “Nancy Business” is a masterclass in tonal balance: it’s one part mystery, another part family drama, and these two elements are glazed in a riotous celebration of all things camp and queer. In one scene you’ll be chuckling uproariously at the banter between Uncle Pike and Devon; the next chilled as an explosion rocks the main street of Riverstone; and periodically have your heart warmed by the interplay between young Tippy and her family, who are still reeling from the death of her father one year later.

I presumed — wrongly, it turns out — that following the events of “The Nancys” the investigative trio would reunite in Sydney; bigger city, bigger stakes, I figured. Actually, McDonald demonstrates just how essential his fictional small New Zealand town of Riverstone is as a sandbox for his larger-than-life cast and their eclectic personalities.  Riverestone is a Midsomer-esque municipality ripe with secrets and ne’er-do-wells, one of whom has set off an explosion on the main street, killing three people and destroying the town hall — too close for comfort to where Tippy’s mother works.

It’s an open-and-shut case for the local constabulary, but twelve-year-old Tippy, her Uncle Pike, and his partner Devon aren’t so sure; and they can’t shake the feeling the threat of a second bomber targeting the Riverstone Bridge is real. And so these unconventional detectives start digging, in secret, away from the prying eyes of her mother, while tensions between Pike and Devon fester, and cracks in a relationship Tippy once thought indestructible begin to form. Solving this mystery, she thinks, won’t just save lives — it might save their relationship.

“Nancy Business” is more of the same, certainly — but it’s also a tauter, pacier, funnier and more heartfelt tale, which demonstrates McDonald’s development as a storyteller. It’s a wonderfully entertaining comic caper with genuine emotional stakes that’ll having you ripping through its pages to determine the identity of the perp, and to see how things wind up for Pike and Devon. Lots of writers can create byzantine plots; few are able to create characters we care about so much. 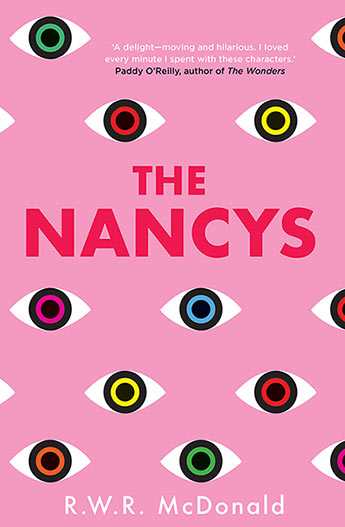 When eleven-year-old Tippy Chan learns of her teacher’s murder, she forms ‘The Nancys’ — an amateur detective club inspired by Nancy Drew — with her visiting Uncle Pike and his new boyfriend, Devon. Together, the trio converge on Riverstone  — a small town in New Zealand with a kaleidoscopic population of less than 4000 — and nose their way into trouble.

This is an ebullient, delightful novel, difficult to describe in a way that conveys its greatness without making it sound schmaltzy. On the one hand, it’s warm and funny; its laughs procured from Pike and Devon’s mordant humour; its affability derived from the Nancys’ burgeoning affinity, and their generous hearts. But The Nancys is also a stellar mystery, layered with red-herrings and suspense, the killer’s identity ably concealed until the final pages in a powerful denouement that has heartbreaking repercussions for Tippy.

The Nancys avoids the trap of condescension that ensnares too many well-meaning books written for adults starring preadolescents. Rob McDonald understands the innocence and purity of this phase in life — when the real world constantly threatens to invade, like a looming shadow, on the colourful pop of childhood — and he wonderfully captures the excitement, hilarity and occasional disillusionment of Tippy’s growing discernibility as she her fellow Nancys intervene in the townspeople’s affairs.

Written with verve, humour and heart, this is a stunning debut, one of those very special books that enthrals from its opening, and leaves you with pangs of regret, desperate to spend more time with its characters. This is hopefully not the last time we’ll meet this investigative trio: maybe a trip to Sydney is on the cards for Tippy?