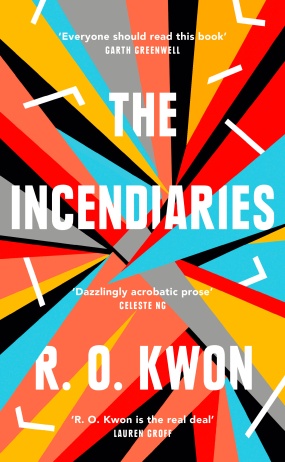 Some books, more than others, require a prolonged period of marination. More often than not, I can immediately distil my initial thoughts about a book into a couple of blithe sentences.  But in the case of R.O. Kwon’s stirring debut novel The Incendiaries, I had to think. I needed a period of proper deliberation. Because there’s a lot to unpack here. It is a book bigger than the sum of its parts. Tragic and cutting, Kwon’s debut left me whiplashed.

The Incendiaries deals with religious fervour and faith warped into something toxic — something dangerous and violent — when Phoebe Lin is drawn into a religious group lead by the enigmatic John Leal as a result of her traumatic past and battle with depression. Will Kendall is our primary narrator in this book that focuses on three young Korean Americans; Will, who has just transferred from Bible College to Edwards University, a lapsed evangelical struggling to fill the hole in his soul where his seemingly incorruptible faith once resided. He is uncertain of his place in the world, but finds much-needed solace in his burgeoning romance with Phoebe — which makes its corruption as a result of Edwards dropout Leal, and his extremist cult, all the more heartbreaking.

The Incendiaries begins explosively — quite literally — and then winds back the clock, detailing the events that engendered such a cataclysmic moment. With searing prose, Kwon chronicles Will and Phoebe’s ill-fated search for meaning and belonging, demonstrating the almost sheer impossibility of completely knowing someone. Charged with breathless momentum, the burning intensity of its prose makes The Incendiaries a glorious one-sitting read — and one that will haunt you.