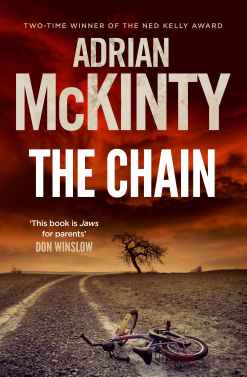 There are breakneck thrillers — and then there’s The Chain.

Adrian McKinty steps on the gas early in this pulse-pounding, nerve-shredding, high-octane tale — and he doesn’t let up. On a Thursday morning, 7:55am, a teenage girl, Kylie, is sitting at the bus stop checking the likes on her Instagram feed, when a man wearing a black ski mask approaches her, gun pointed at her chest. His instructions are simple: keep calm, wear a blindfold, and behave. Her fate, he explains, depends on what her mother does in the next twenty-four hours.

Kylie’s mother is Rachel, who — when we smash-cut to her in the second chapter — is driving towards her appointment with the oncologist. Just a routine check-up to confirm her breast cancer is still in remission. But she’ll never get there. One phone call is all it takes to derail Rachel’s life. It comes from someone utilising a speech modulation machine. It tells her she’s not the first and she won’t be the last; that it’s not about money, it’s about ‘The Chain;’ and that the call that will follow is the most important of her life. Which it is. Because the next time her phone rings — an ominous Unknown Caller — it’s from a panic-stricken woman with one chilling revelation: she has Kylie. And if she’s to survive, Rachel must accomplish two tasks. The first is relatively straightforward: a ransom. Which is to be expected in the case of a kidnapping. Rachel’s second objective is more puzzling. She must kidnap someone else to replace Kylie in the chain. And with that, the caller hangs up. And McKinty’s mile-a-minute thriller truly begins.

The Chain is turbocharged entertainment; a cinematic blockbuster, full of intriguing characters and violent action. I am a huge admirer of McKinty’s Sean Duffy series  —each one are sophisticated, stylish and engrossing crime thrillers, which rip along at a cracking pace, and pack more twists and turns than a street map of Belfast — but this something else. This is McKinty cut loose; unchained, if you’ll pardon the pun. You won’t read a faster-paced, white-knuckle, lip-chewing thriller this year. Maybe ever. It’s fast, furious and unforgettable.