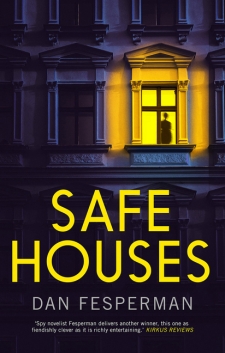 A superbly crafted espionage thriller that doubles as a gripping mystery.

West Berlin, 1979; the height of the Cold War. Helen Abell is the young, rookie overseer of the CIA’s network of clandestine safe houses. She’s serving one such safe house, which is supposed to be vacant, when she overhears a meeting between two people, speaking  in a coded language that hints at a vast conspiracy. Encouraged by her lover, a veteran agency operative, to forget what she heard and erase the taped evidence, Helen returns to the safe house, only to stumble upon the abhorrent scene of a high-profile undercover agent violating one of his contacts.

Thirty-five years later, Helen and her husband are shot dead in their farmhouse; purportedly by their mentally-ill son. But Anna, his older sister, doesn’t believe he’s capable of such violence, so hires private investigator Henry Mattick to uncover the truth. She doesn’t know that Henry’s already been tasked by a shadowy benefactor to observe the farmhouse and report back to his mysterious contact…

Fesperman cleanly divides the dual narratives of Safe Houses into the past and present, setting scenes that slowly build in intensity, and keeping readers guessing about who can and cannot be trusted. The novel only stumbles once, when Anna and Henry become romantically involved, which feels like such a cliche, but I’ll forgive Fesperman, because the rest of Safe Houses is watertight; the prose crisp, the characterisations vidid. Fans of Cumming, Herron, Porter and le Carre will feel right at home in Fesperman’s world. It’s a chunky six-hundred page thriller that readers like something half the size, and leaves you wanting more.