A hugely satisfying evocation about the complexities of family life, Clock Dance is wise, humane and always insightful.

One of the things I love most about Anne Tyler’s fiction is that she never lets style triumph over substance; the understated simplicity of her writing is artistry of the highest order. Her prose is assured, warm and graceful; never ostentatious. You sink into an Anne Tyler novel; it envelopes you, and you don’t realise how deep you’ve dived into her world, how invested you are in her characters, until something snaps you back to cold, hard reality, and you realise from the placement of your bookmark  that you’re nearing the end of your time with this incredible storyteller. Clock Dance is a novel to savour; equally enjoyed in the moment, and upon reflection.

Willa Drake is inherently placatory. The defining moments of her life — when she was eleven and her mother disappeared; being proposed to at twenty-one; and the accident that made her a widow at forty-one — weren’t instigated by her, but by others. At 61, when Clock Dance launches into its core, we understand Willa has not necessarily lived an unhappy life, just a bittersweet one; a life tinged with occasional regrets. When she receives a phone call telling her that her son Sean’s ex-girlfriend has been shot and needs her help, Willa drops everything and flies across the country, despite her second husband Peter’s dismay. It’s this decision — made entirely herself, uncoloured by the opinions of outsiders — that forces Willa to scrutinise her life, and the people in it, and contemplate change.

Clock Dance is an intimate and tender tale of marriage, family and home. Achingly observant and endearing funny, Anne Tyler brilliantly explores a woman’s steps towards reshaping her own destiny and choosing her own path. The book brims with insights that sum up entire relationships. I haven’t been so moved and in love with a book and its characters for a very long time.

A wild fever-dream of a novel, Andrew Hutchinson’s One is a symphony of memory, love, grief and obsession; a riveting, pulsating read, supercharged with feeling, fuelled by a mystery that unspools at an electrifying pace.

Our unnamed narrator, obviously a troubled young man, broken-hearted and alienated from friends and family, has just come off the night shift and arrives home to find a woman sleeping in his driveway. She claims to have once lived there, which hardly seems a satisfactory explanation for such odd behaviour, but given the man’s own fragile mental state, he accepts this, and drives her home — whereupon another man crashes into the back of them. The woman claims this man is a stalker, and they need to escape; and so they do, to the coast, a road trip during which the man’s memory begins playing tricks on him, and he can’t shake the feeling that he’s been through something similar to this experience before.

One has the velocity and suspense of a thriller, the kind that demands reading in one sitting. Hutchinson writes brilliantly about the nightmarish underside of love, his insights sharply observed and, ultimately, morally challenging. One is vividly cinematic yet subtle and full of moral ambiguity,  and is as impossible to put down as it is to forget. 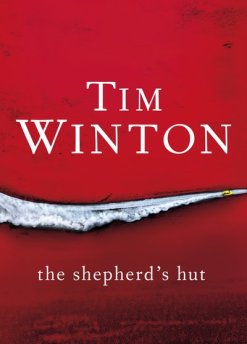 Tim Winton is my own personal enigma. It’s not that I don’t value, understand, or respect his stature among Australian literary superstars — or indeed his place as one of the world’s finest contemporary writers — it’s just that I’ve yet to read one of his books that’s resonated with me as strongly as, say, Cloudstreet or Breath did for so many of my peers. I have read both of these and enjoyed them, absolutely  admired them for their craft, but whereas so many others felt compelled to wax lyrically about them and offer voracious applause, I was a step back, clapping politely. I guess everyone has those authors, and those books, that are so highly regarded by seemingly everybody else on the entire planet, but left you feeling that little bit cold. You wish you could feel its embrace, all you want to do is curl up with everybody else, feel the love; but something’s holding you back, something you can’t quite explain. Nevertheless, a new book by Tim Winton was hardly something I could leave unread on the shelf. I dove into The Shepherd’s Hut, ready to be wowed, hoping this would be the one connected, that struck all the right chords and would have me singing from the same hymn sheet as everybody else.

It came very, very close. In fact, I’d so as far as to call The Shepherd’s Hut by favourite book by Tim Winton.

Jaxie Clackton is on the run, having found his father crushed to death under a Toyota Hilux. It’s an accident, but young Jaxie is convinced it won’t be viewed as such by the locals, who were all aware how savagely Sid Clackton beat his teenage son and late wife. They won’t need much convincing to believe it’s murder. So Jaxie hurriedly packs for an immediate departure — leave some vital pieces of kit behind — and vanishes into the harsh desert, whereupon he eventually happens across an old shepherd’s hut with a single, strange occupant named Fintan MacGillis; a priest with a dark secret. And whose secluded home might not be the safe haven it initially appears to be.

Jaxie is a product of his childhood. He has grown up surrounded by violence, and the tools of violence. He is an angry young man, and he stays angry, throughout the text, until its end and presumably into the future. There were long periods I hated this young protagonist. I empathised with his plight, and understood where his rage stemmed from. But there were times, nonetheless, when I might’ve hoped the harsh desert landscape would swallow him whole. This, despite his honest appraisal of himself, and his own awareness at his inherent brokeness. But I couldn’t repel the book’s hold over me.

The Shepherd’s Hut is brutal. Bruisingly so. It is a masterly encapsulation of toxic masculinity. This is Winton covering familiar territory, but it’s injected with an urgency, a sense of constant, inescapable threat that adds up to a taut page-turner. Now I desperately want to go back and re-read Cloudstreet and Breath.