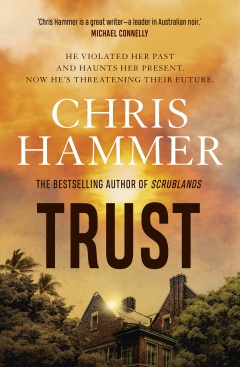 In “Trust” Chris Hammer creates a microcosm of secrets, scandal, and skulduggery enmeshed in the threat of constant violence. In his hands, Sydney becomes a city of shadows; a place where menace lies around every corner, and dark intentions brew within every building. A malevolent cabal has spread long tendrils of corruption through every facet of the New South Wales government — and veteran newspaperman Martin Scarsden is determined to expose it.

“Trust” is so tightly wound up, it’s like a rubber band ready to snap; already stretched to breaking point after its opening dozen pages, by which time Tarquin Molloy has stolen confidential data from the trading floor of a bank, and Mandalay Blonde — Scarsden’s partner, but deserving of equal billing here, such is her importance and prevalence — abducted from her home in Port Silver. These events are tied to a subversive criminal enterprise that exists at the highest echelons of New South Wales politics.

This is Hammer writing pedal-to-the-metal, with a hook as enticing as “Scrublands,” enhanced by superior writing and plotting. Rather than rest on his laurels, Hammer has pushed himself beyond his previous mysteries, which were already A-Grade. In “Trust” he has crafted a byzantine plot with so many threads that never tangle. There’s a pulse-pounding shootout, a horrific torture scene (that stops short of being grossly visceral), and countless revelations and twists. Hammer orchestrates it all with virtuosic aplomb. 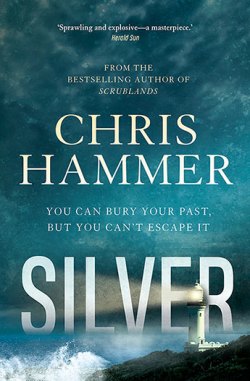 A fine-tuned mystery wrapped in an involving story of community and family dynamics that is satisfying on every level.

Forgoing the evocative opening imagery of Scrublands, and the scorching momentum it sparked, when a young priest calmly turned his rifle on his congregation, Chris Hammer eases into his second novel to star Martin Scarsden, with the veteran journalist driving into Port Silver — a hotspot of regional gentrification, and the home Martin waved good riddance to decades earlier — with two young hitchhikers he picked up along the way nestled in his backseat. Their cheerful spirits alleviate the tension he feels returning to a place laden with traumatic childhood memories.

Martin has emerged from the fallout of events in Scrublands with a new partner, Mandy Blonde, and her young son, Liam. Mandy has inherited an old house in the seaside town, and this is their chance to start afresh; Riversend, its history of violence, now a distant speck behind. But when Martin arrives at Mandy’s temporary homestead, he finds his best friend from school days brutally murdered, and Mandy leaning over him — the obvious suspect. Certain of her innocence, and exasperated by the police investigators who can’t seem to look beyond her, Martin launches his own investigation into the murder, prying open memories from the past, forcing confrontations with those he thought he’d vanquished long ago. Then another horrific event occurs, on an even grander scale — Australia’s own rendition of the Jonestown massacre — and Martin realises the heart of Port Silver is black as pitch.

Silver is a slower burn than Scrublands, but it feels deliberate, its plot set to simmer as Hammer establishes the geography of Port Silver, as well as its major and minor players, and dips into Martin’s childhood memories, and his struggle to marry the two sides of himself: the battle-hardened, world-weary reporter who makes a living exposing and transcribing the very worst of humanity, and the man who wants to start a family. The context is important, because when Hammer lights the fuse, and the plot kicks into higher gear, the stakes feel more extreme, and definitely more personal; the reader is invested in the vast cast that populates Port Silver. And the final two-hundred pages truly gallop, destined to be inhaled in one white-knuckled sitting.

With Silver, Chris Hammer proves himself once again to be a skilful practitioner of the crime genre, and in Martin Scarsden has created one of its most textured and fascinating protagonists.