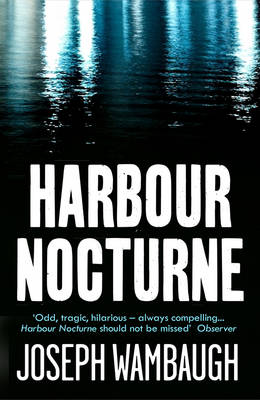 Michael Connelly often references Joseph Wambaugh as one of his writing influences, but until Harbour Nocturne, I’d never read one of the former LAPD sergeant’s books. Now that I have, I’m keen to delve into his backlist; particularly his early stuff, which established his reputation as the father of the modern police novel. Wambaugh’s most recent novel – published in 2012 – reminded me of Ed McBain’s 87th Precinct series, which is a very good thing indeed. Just like McBain’s long-running series, it isn’t necessarily the crime – or the actual plot – that makes Harbour Nocturne so absorbing. It’s the cops – their unique blend of personalities and experiences – that make the story zing, and allows for moments of genuine hilarity and heartbreak. These cops are real people, thrust into insane scenarios, just trying to do their best to keep the city safe.

Harbour Nocturne marks Wambaugh’s fifth novel about the cops of Hollywood Station, a fictional precinct, made up of a zany bunch of characters with various idiosyncrasies, united by the uniform. None come across as stereotypes. You’ve got Chester Toles, better known as “the unicorn” because he’s never around when he’s needed; Chester Toles, dubbed “Hollywood Nate” because he wants to be an actor; and the two prevalent copes in this particular story, Flotsam and Jetsam, two surfer dudes, who – because of Jetsam’s prophetic foot – are drawn into a convoluted undercover operation involving a wealthy Russian obsessed with amputees, who’s also involved with a human-trafficking ring.

The novel’s protagonist is Dinko Babich, a longshoreman in the port of San Pedro, who falls for a young Mexican prostitute named Lila, and decides to make it his mission to protect her. In doing so, he becomes involved in the amputee-obsessed Russian’s business, and his story – and that of the cops of Hollywood Station – intersect throughout proceedings, until the slam-bang conclusion. It’s Dinko’s actions that provide the novel impetus, but in truth, his storyline is fairly formulaic, and lacks invention. It’s the various anecdotes and “side stories” that propels Harbour Nocturne above other police procedurals; the embellishments surrounding the core.