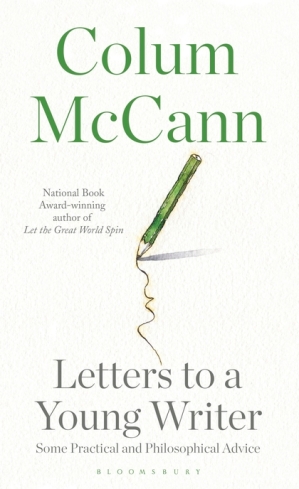 In my early twenties I churned through writer’s manuals and magazines, using their words of wisdom to fuel my creative fire. Immediately noticeable was the disparity of the advice offered, particularly when it came to process: some said it was mandatory to know your ending; others said that limited the scope of your story. Some said avoid prologues; others said they could be quite useful. I heeded some advice, ignored others. As I write this, I haven’t published a novel, which suggests I took a wrong turn somewhere down the track. Doesn’t matter: a writer can always re-route, find a new direction, start again. Resilience is key. If imagination and determination is the only limit, there’s no need to fear failure. I’ve got both in spades.

Colum McCann points out in his introduction to Letters to a Young Writer, borrowing words from Rilke’s Letters to a Young Poet: “Nobody can advise and help you… there is only one way. Go into yourself.” Ultimately, McCann says, it boils down to “the strike of the word upon the page, not to mention the strike thereafter, and the strike after that.” We should listen to successful writers, absolutely; accept their advice, value their input. But our writing is our own; there’s not one path to success, and failure is only assured if we don’t spend time in front of the keyboard, or with pen in hand, creating; actually doing the writing.

The most powerful paragraph in McCann’s Letters to a Young Writer — for me, at least — is when he says:

“The most destructive force in your life is liable to be the unwritten story. If you don’t write, you’re not a writer. You’re avoiding the competition of yourself. Simple logic, but it’s a kick in the chest when the page is empty. Too much white space is not a good thing. Empty is empty. And empty haunts.”

It’s these gems that make the book such a powerful resource. Not necessarily the practical advice — which is also included — but rather the philosophical enlightenment. Letters to a Young Writer is a book I’ll keep nestled in my shelf forever; there to spark me into life, ignite my creative fire whenever it’s waning. I rushed through it during my first read, and took my time with the second, savouring McCann’s intimacy with his reader, highlighting the segments that resonated most. It’s a must-have for any writer in your life.