It has been many, many years since I last read Mark Waid and Alex Ross’ Kingdom Come, but after watching the enjoyable (but heavily flawed) Justice League, I was in the mood to indulge my love of all things DC Comics. Kingdom Come was the closest collected edition at hand, but to be frank, I was a little wary about returning to it after more than a decade. I last read it in High School, and have held it to such a high standard since that inaugural reading, I feared the scrutiny of my “adult eye.”

This “Elseworlds” tale —  a story that takes place outside the DC Universe canon — occurs in a future where a vigilante segment of the super hero population, emboldened by public sentiment, have broken the established “code” set by the traditional heroes, and have started killing villains rather than incarcerating them. Disturbed by this brave new world, Superman has “retired” and his Justice League peers have gone into various states of hibernation or eccentricity. Superman has isolated himself and no longer dons his heroic garb, essentially retired. Batman, addled by an accumulation of injuries during his decades of crime-fighting, now patrols Gotham City with a fleet of cyborgs.

After the extermination of super-villainy, these new breed of heroes are left with no one to combat but themselves; it’s a wild west with super powers rather than six-shooters. When a catastrophic incident wipes out Kansas, it forces Superman and his fellow Justice Leaguers to return order to a world in disarray; to remind them of the importance of a moral code, of fighting for truth and justice… and to foil the evil machinations of Lex Luthor and co.

The story is narrated by an elderly pastor named Norman McCay, who is approached by The Spectre to be the supreme being’s guide through these upcoming potentially apocalyptic events. As a kid, I disliked these scenes because I thought they detracted from the action, but presently, I really appreciated this human perspective. It is unfathomable to imagine living in a world populated by God-like beings with the power to obliterate us with the blink of an eye; imagine being  a person of faith. And while I have always been a great fan of Alex Ross’s art — his painterly style is often mimicked but never matched — I’ve never liked his sequential work, and find his panels rather static. Of course, whether Kingdom Come would’ve had such resonance without his illustrations is unanswerable, and his work certainly isn’t flawed; it just lacks velocity.

Kingdom Come is one of those collections non-comic-reading people can enjoy. Unrestrained by continuity, it is that rare thing in comics: a story that has a beginning and an end. A decade after I last read it, I’m thrilled it still holds up, and serves as a demonstration that tales involving costumed heroes don’t just have to involve punch-outs and explosions. The best stories have heart. 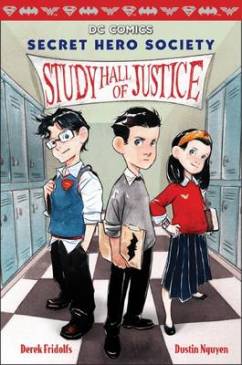 The cynic in me wanted to view Derek Fridolfs’ and Dustin Nguyen’s Secret Hero Society: Study Hall of Justice as a perfunctory vehicle to spotlight younger versions of DC comics heroes and villains ahead of the release of the blockbuster film Batman v Superman: Dawn of Justice. But I’m a sucker for the DC’s ‘trinity’ – Batman, Wonder Woman and Superman – and I’m a long-time admirer of Dustin Nguyen’s art. So despite my hesitations, I pulled a copy from the shelf and dived in… and I was more than pleasantly surprised. I was delighted. This is a book that’ll have both adults and kids in stitches, scouring pages for inside jokes and references, and enraptured by the core mystery. In other words, it’s a winner.

Young Bruce Wayne, Clark Kent and Diana Prince form their own Junior Detective Agency in the halls of Ducard Academy in Gotham City when they realise there’s more to their new boarding school for ‘gifted’ children than meets the eye. They’re an oddball triumvirate, each displaying the divisive characteristics that’ve been portrayed in the comics for decades. Together, they unravel the mystery behind the school’s secret headmaster, overcoming the villainous obstacles in their way including fellow students Lex Luthor, Harley Quinn and the Joker, as well as dastardly school staff including General Zod, Hugo Strange, Vandal Savage, and so forth.

Secret Hero Society: Study Hall of Justice is layered with references that young fans and older will enjoy – but every element is explicated well enough to ensure the layman won’t be left lost and confused. This is fundamentally a story about friendship – how different personalities, regardless of upbringing, can be moulded into an effective team – with a good amount of super-heroics thrown in. It’s told through traditional comic book pages, journal entries, pamphlets, text messages, and report cards, and the variation enhances the tale’s readability. The only flaw I identified was the novel’s pacing. The story takes its time to get going – it’s not plodding, but necessarily measured in order to establish the characters and their world – but in contrast the climax feels rushed, like suddenly the storytellers realised they were running out of pages. It’s not a major issue, and it certainly doesn’t take away from the novel’s successes, but it’s a noticeable stumble.

This is the kind of book I wish had been around when I was a kid. It’s fun and quirky, but doesn’t talk down to readers. I’d love to see further adventures in this universe, and there’s certainly a ton more characters to explore from the DC Universe.

The third volume of J. Michael Straczynski’s re-imagining of Superman is flawed, inconsistent, and ultimately brings into question the purpose of DC Comics’s entire line of ‘Earth One’ original graphic novels in a post-New 52 world. Look closely and you’ll see, this is a story full of good intentions, but inept execution means it’s filled with more valleys than peaks.

Superman: Earth One – Volume 3 immediately loses appeal because it’s yet another retelling of the General Zod storyline we recently saw come to life on the big screen in Man of Steel. Regular readers, such as myself, have seen Zod’s origin retold on innumerable occasions over the years, as the elastic band of modern day continuity twisted and tweaked the character to suit a particular moment in Superman’s history. Straczynski’s take is particularly uninspired; almost a cardboard cut-out of what we’ve seen before. A shame, as with supposed free reign, surely the writer could’ve thought outside the box, just to differentiate his Zod from countless others. Artist Adrian Syaf’s redesign of the character is similarly uninspired; a hood shrouds Zod’s eyes in darkness, making him look especially untrustworthy, which makes the United Nation’s decision to back him over Superman even more laughable.

As Volume 3 opens, Superman remains an enigmatic figure, a super-powered threat that must be taken very seriously. Considered a saviour by some, a menace by others, young Clark Kent’s alter-ego is suffering from a case of the Spider-Man’s – – hey, it could be worse, at least he doesn’t have J. Jonah. Jameson giving him grief. The US Military have employed Mr. and Mrs. Luthor – that’s Alexandra and Lex, by the way – to develop the means to harm, or ideally destroy, the Man of Tomorrow. And they choose the moment Superman is battling Zod to test the device; targeting only Supes, naturally, not the other Kryptonian, because the UN have granted him a free pass (for nonsensical reasons).

Amidst all the fighting, Clark Kent’s relationship with his neighbour takes a romantic turn, and Superman’s gradually developing an affiliation with Lois Lane, too (who uses a Superman-symbolled Bat-signal, yes, really) to get his attention. Straczynski’s most comfortable during these quieter moments, nailing Clark’s general unease with himself and his struggles to lead a successful double-life, but these fleeting moments aren’t enough to salvage this convoluted mess. The Luthor’s are underdeveloped, and the culminating battle, which has fatal consequences, lacks any sort of resonance. The artistic highlights, which include some wonderfully dynamic iconic shots of Superman doing battle, or taking to the skies, are let down by occasionally clunky layouts and shot selections.

Superman: Earth One – Volume 3 is undercooked, almost rushed; from its overall plot, to its dialogue, to its art. Plot contrivances abound; the art fluctuates between very good and average; Straczynski’s characterisations of his cast vacillates uncannily. It’s all a bit of a mixed mag, and severely disappointing.