The Fall is the kind of thriller I would’ve loved as a child and absolutely adored as an adult. It’s a sharp, contemporary crime novel with classic genre elements, and nail-biting suspense that will keep readers on the edge of their seat. It’s a page-turning masterpiece for readers young and old.

As is the case with all great crime novels, the set-up is simple. In the middle of the night, Sam — son of irascible crime reporter Harry — is woken by angry voices from the apartment above. He edges to the window, to check the scene above, and sees a body fall from the sixth-floor balcony. When Sam goes to wake his father, he discovers Harry is gone. And when Sam gets downstairs, the body has vanished.  But Sam knows what he saw — and worse for him, somebody else knows what he witnessed. Someone who wants Sam silenced at any cost.

The Fall is a pulse-pounding thriller with the heart and soul so often missing from its contemporaries. The strained relationship between Sam and Harry — and indeed Sam and his mother — is truly evocative, and adds a powerful emotional layer to proceedings; but never at the expense of the plot’s raw pace, which rips along phenomenally.

Tristan Bancks has concocted a thriller that has everything you could ask for – a twisty plot, memorable characters, and plenty of action. If there’s a child in your life who has been glancing at the line of Michael Connelly novels on your shelf, or skimming through your Raymond Chandler collection, put a copy of The Fall in their hands.

Win, Lose or Draw is the 42nd and final book in the long-running Cliff Hardy series, and is Peter Corris’s last novel (the reasons for which you can read about here). And while I’ll certainly miss my annual summer sojourns with the Aussie private detective, there’s something immensely satisfying about an acclaimed series ending on a high note. There’re no unnecessary theatrics to mark ‘the end’;  the final scene is not of Cliff clutching his chest as his troublesome heart finally beats its last. Win, Lose or Draw simply epitomises what has made the Cliff Hardy series resonate, and what’s lead to Corris being named the grand master of Australian crime fiction.

Win, Lose or Draw amalgamates some fairly well-trodden PI tropes — a missing girl, drugs, yachts, and the sex trade — into a finely-tuned, utterly compelling mystery. Hardy follows a trail from Sydney to Norfolk Island, Byron Bay, Coolangatta, and back again, utilising unlimited expenses thanks to the girl’s father; Gerard Fonteyn, a wealthy businessman, who is desperate for the safe return of his daughter. Hardy comes up against some hard-hitting gangsters, corrupt cops, and gradually unravels the truth behind Juliana Fonteyn’s disappearance.

Peter Corris’s final book moves like a well-oiled machine. It’s polished and primed, boasting the knife-sharp dialogue and wicked humour that the series is celebrated for. There’s no tying-up of loose ends; no callbacks to previous cases, or cosmetic appearances by characters who’ve populated previous novels. Win, Lose or Draw is simply another world-class novel by one of Australia’s best and most consistent crime novelists. Let’s not mourn the fact this is the end; let’s celebrate 42 cracking mysteries. 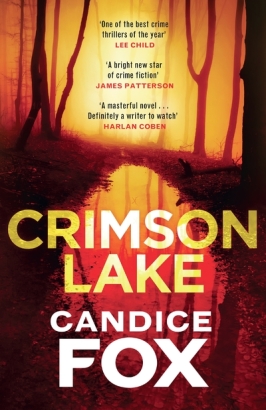 Australian crime fiction is experiencing something of a renaissance thanks to a handful of fresh female voices. Jane Harper’s The Dry was 2016’s darling and rightfully so — I called it “the year’s best achievement on the Australian crime writing scene” in my review, and named it my Book of the Year — and in 2015 I was absolutely blown away by Emma Viskic’s Resurrection Bay: “stripped-down and raw, and packs one helluva punch.” And then, of course, there’s Candice Fox, who has carved out a distinctive square on the map of contemporary crime writing with her Bennett / Archer trilogy (Hades, Eden and Fall), and  who ranks as one of my absolute favourite authors. Perhaps it’s too early to predict 2017’s Aussie crime fiction blockbuster, but one thing is for certain: Candice Fox’s Crimson Lake will feature in the conversation.

Crimson Lake introduces former Sydney-based police detective Ted Conkaffey, who was accused, but not convicted, of abducting a 13-year-old girl. But the accusation is enough. To his wife, his peers, and the general public, a lack of conviction isn’t proof of innocence, just evidence of a lack of proof. Ted is an outcast. The life he had is over, and so he flees Sydney to Cairns: specifically the steamy, croc-infested wetlands of Crimson Lake. There he meets Amanda Pharrell — an accused and convicted murderer now operating as a private detective — and partners with her to investigate the disappearance of local author Jake Scully.

Veteran Fox readers will notice some thematic similarities between Crimson Lake and her Bennett / Archer trilogy. She is the absolute master of the enigmatic protagonist: characters with deep, dark secrets, who readers will follow and support, but with occasional hesitancy; because what if the worst is true? What if we’re  actually cheering on a killer in Amanda Pharrell? And Ted — our narrator — what if he’s hiding the truth from us? What if he is guilty of abducting the girl, and leading readers astray? We’re never quite certain — not totally — until the novel’s very end of how trustworthy and reliable Ted and Amanda are, which makes Crimson Lake incredibly compelling and propulsive.

Candice Fox’s prodigious ability to keep coming up with unforgettable characters elevates Crimson Lake beyond the standard police procedurals that proliferate the genre. Oh sure, Ted and Amanda’s investigation into Jake Scully’s disappearance is effectively handled — plenty of twists and red-herrings, and a heart-stopping climax to satisfy plot-focused readers — but it’s their uneasy comradeship, and their secrets which threaten to bubble to the surface, that make the novel a blast. It boasts Fox’s signature style, edge and humour to delight established fans, and will surely win new ones, too.

One of the best Australian crime writers just levelled up. If you haven’t jumped on the Candice Fox bandwagon, now’s the time. Crimson Lake will be one of 2017’s best crime novels, and Candice Fox has quickly established herself as one of our finest talents operating in the genre. That’s not hyperbole. It’s fact. Read Crimson Lake — you’ll see.

It’s always dangerous, in my mind, coming out of the gate with a first novel in an intended young adult series, and immediately comparing it to one of the pinnacles of Australian YA: John Marsden’s Tomorrow series. But that’s precisely what Text Publishing has done with Mark Smith’s The Road to Winter. And y’know what, though I hate to admit that I saw a slither of truth any marketing shtick, I’ve got to say: the comparison, in this case, is earned. But at the same time, it feels like a novel crafted for that same audience – by which I mean, it’s aimed at the ‘older’ end of the YA spectrum, and based on some of its content, is possibly better suited to an adult audience. Which puts me in a tough spot: as a reader, I loved The Road to Winter, would highly recommend it, and reckon you should reserve a copy at your local independent bookshop. As a bookseller, I’m a tad perplexed as to who’d I’d pitch this to. On the one hand: a visceral book about survival, packed with plenty of action, and a dash of romance – perfect for a YA audience! But when it delves into pregnancy and childbirth, I’m suddenly not so sure…

A couple years back, a deadly virus – and the consequent violence – wiped out most of humanity. Sixteen-year-old Finn lost his parents and his whole community, and since then he’s lived alone with his dog Rowdy in his hometown on the coast. He has survived thanks to his father’s preparations, and an uncanny knack for hunting and fishing. Seriously, Bear Grylls has got nothing on this kid. But starvation and injury aren’t the only threats out there: there are other survivors, some of whom don’t care to trade their wares; a particularly nasty crew called the Wilders, led by the ruthless Ramage. So far, Finn’s stayed out of their way, kept to himself, a lonely, but contented existence.

Until! (Because there’s always an until!)

One day Finn comes across a girl on the beach. Her name is Rose, and she is a Siley – an asylum seeker – who is on the run from Ramage. She was on the run with her sister Kas, but the two got split up during their escape, and now she needs Finn’s help to find her. It’s not that Rose is unwilling to do the job herself: she’s just in no condition to be stalking through bushland. So Finn agrees to help this girl she barely knows – and her sister – and in doing so he paints a target on his back. And Ramage isn’t the kind of guy you want hunting you down.

Finn’s a brilliant protagonist: your typical sixteen-year-old Aussie kid who flits between vehement self-assuredness and typical teenage uncertainness. This is a kid who has survived two winters on his own, is obviously very capable and courageous; on the other, he’s wounded by the remnants of the life he once knew, and the death of his parents. He’s tough on the outside, sure – but there’s a sympathetic undercurrent he’s rarely had need to let slip since the virus decimated humanity.

The Road to Winter is unashamedly the start of a longer epic. It sets up the pieces, provides insight into the world, and will leave readers desperate for the next chapter in the characters’ lives. I loved it, and reckon plenty of others will, too – I’m just not sure how many of those readers are going to be in the YA bracket. Could be I’m out of touch with that audience – I am not an avid reader of the genre, and you might well be reading this thinking, You idiot! YA is supposed to push the boundaries! So I guess I’ll wait to see how that audience responds. Hopefully resoundingly – I want sequels!

But removing the bookseller part of my brain, as a reader, who cares nought for genre or intended audience: The Road to Winter is great. Fast-paced, relentless, poignant. What more could you want?