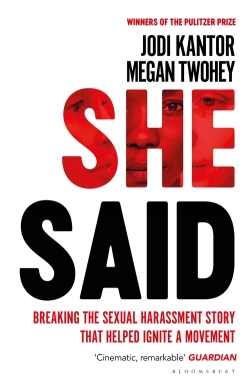 “If the story was not shared, nothing would change. Problems that are not seen cannot be addressed. In our world of journalism, the story was the end, the result, the final product. But in the world at large, the emergence of new information was just the beginning — of  conversation, action, change.”

Jodi Kantor and Megan Twohey, the two New York Times journalists who broke the Harvey Weinstein  story and helped ignite the  burgeoning #MeToo movement, tell how they did it in this behind-the-scenes, blow-by-blow recount of their investigation. This story, like their series of articles implicating  the Hollywood film producer in an abhorrent three-decade-long sexual misconduct scandal, doesn’t require sensationalism; She Said powerfully and starkly depicts the reality of life as an investigative journalist, as Kantor and Twohey doggedly pursuit leads and sources, encourage witnesses to come forward and speak on the record, and deal with Weinstein’s attempts to sabotage their efforts to reveal the truth.

She Said is a powerful testament to the power of journalism, and a tribute to Kantor and Twohey’s persistance and commitment to not only uncovering the powerful men in America responsible for sexual abuse, and for covering it up, but for identifying the elements of the system that keep sexual harassment so pervasive. This is only the beginning of the dismantling of an oppressive system. She Said is vital to stoking the movement’s flame. Long-form journalism at its absolute finest.