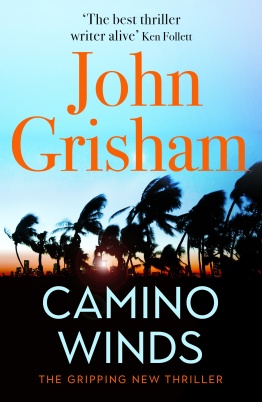 Much like its predecessor “Camino Island,” John Grisham’s latest is a lightweight thriller, efficiently paced and plotted, rendered with all the virtuosity of an experienced genre practitioner. It is Grisham at his most pulpy.

Camino Island is a resort island in Florida inhabited by some of America’s most popular writers, all coalesced into a literary cabal by local bookshop owner Bruce Kable. But in the aftermath of Hurricane Leo, who leaves a trail of destruction in his wake, one of Bruce’s author pals turns up dead — actually, murdered.

Nelson Kerr, a former trial lawyer-turned-whistle-blower-turned-bestselling-thriller-writer, had plenty of enemies, but distracted by the hurricane clean-up (and addled by their own ineptness) the local cops are unable to find a suspect. So it’s up to Bruce and his writers to solve Kerr’s murder, which enmeshes them in a plot involving his unpublished manuscript, Medicare fraud, an unapproved Chinese drug, and nursing home abuse — not to mention professional hired assassins.

“Camino Winds” unravels leisurely, but assuredly. This is not a white-knuckle thrill-ride, but a methodical procedural. Various characters flit in and out of Grisham’s spotlight as the investigation takes on a larger scope. His handling of its many pieces is impressive, but the discerning reader might take issue with his workmanlike approach. 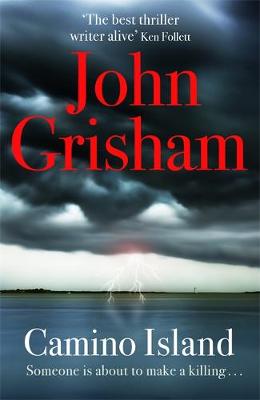 John Grisham forgoes his trademark courtroom drama for a multi-layered caper story, which isn’t much of a thriller or mystery, but is entertaining nonetheless. His latest is a lightweight page-turner, hardly vintage, but ensures a few hours of escapism.

Camino Island opens with a heist strangely lacking in suspense, but high in stakes. The prize? The five manuscripts of F. Scott Fitzgerald’s only novels, valued at $25 million, under lock-and-key in a high-security vault located deep beneath Princeton University. But there’s no such thing as the perfect crime, and this gang of five made mistakes, which result in a couple of arrests. Despite pressure from the FBI’s Rare Asset Recovery unit, the remaining thieves vanish without a trace, and for a time, their investigation stalls, until a man on their watch list – an infamous bookseller on Camino Island named Bruce Kable – comes to their attention. More specifically, his collection of rare manuscripts. Determined to employ a mole to get close to Kable and assess his possible criminality, Mercer Mann, a struggling writer burdened by debts – and coincidentally, a former frequent-traveller to Camino Island – is somewhat reluctantly pulled into the fold.

Grisham’s unravelling of this cat-and-mouse tale is rather perfunctory, if not overwhelmingly sedate. Camino Island is never boring; it just never threatens to get your pulse pounding. The manner in which Grisham ties his various plot threads is impressive, and showcases his skillful plotting, but is stylistically bland. It’s a fine thriller, just not a sparkling one, to be read and enjoyed, then shelved and forgotten. 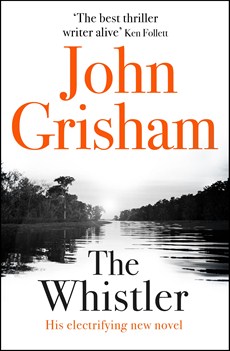 A great premise deserves better than this by-the-numbers rendition of a high-stakes investigation into judicial misconduct. The front cover promises an electrifying thriller, but Grisham’s latest doesn’t even spark.

Lacy Stoltz, an investigator for the Florida Board on Judicial Conduct, is confronted with the possibility that a highly regarded judge may be on the take. According to an enigmatic and indicted lawyer who is representing a clandestine whistle-blower, Claudia McDover is in league with organised crime. If the whistle-blower’s accusations prove correct, that would make McDover the most corrupt judge in US history. As Grisham makes abundantly clear: Stotlz and her colleagues are not cops. They don’t carry guns, they don’t deal with traditional bad guys; they root out corruption. Which means they’re totally unprepared for the dangers that await them.

The Whistler suffers from a distinct lack of thrills and gusto. There is one moment – one – genuinely shocking event, maybe 100 pages into proceedings… and that’s it. Then the novel reverts to form, and plays out just as readers will expect. It’s a little infuriating that Grisham does so little with such a potentially intriguing plot. There are minimal twists – if any – and the prose is so dry it could be sandpaper. Everything is telegraphed, and bizarrely, the novel reads like this was intentional; like Grisham made the stylistic choice. I just don’t understand it. There’s still something enthralling about the plot — a part of me thinks I retained interest because I assumed another dramatic moment was looming, which never eventuated, but kept me turning the pages — but that might be a little harsh. For all my criticism, The Whistler is a book I finished over a couple of nights.

Lacy Stoltz, the protagonist, is impressively fearless, but also rote: we never really understand what drives her, and the few glimpses we have into her life are fairly uninspired. Let me paint you a picture: she’s single, not really interested in a relationship; but is attractive enough to turn heads; lives alone with her dog; very career-focused. None of these traits are bad, you understand; but they’re not nuanced, or massaged into her personality. They are quite literally just stated on the page, and that’s about the limit of her characterisation.

Grisham’s insight into legal proceedings is, as always, highly captivating — but it’s not enough to sustain this tepid thriller. An unfortunate misstep for the multi-million copy bestseller. I’ll be interested to see what his legion of fans think. Am I alone in my reservations? I think I’ll re-read The Client or The Pelican Brief — heck, maybe even my old favourite The Street Lawyer — just to remind myself how good Grisham can be.

Sebastian Rudd is a criminal defence attorney who takes on cases other lawyers avoid. He doesn’t maintain a traditional office; he works from the back of a car (not a Lincoln, thank goodness; Michael Connelly’s Mickey Haller might file a lawsuit). He doesn’t belong to a law firm; he’s a lone gunman, an essential cog in the justice system that stipulates innocence until proven guilty.

Rudd is a fascinating protagonist; not necessarily likable, but someone readers will respect and admire for his tenacity, unorthodox methods, and legal expertise. He admits to being a terrible father, and has also proved himself an abysmal husband (now ex); and representing criminals means he’s never far away from society’s underbelly, who are prone to holding grudges; and he’s blacklisted by the nebulous “City’s” police department. Although he’s happy to bend the rules, he never breaks them; he will use every bit of legal trickery he can muster, but is never outright dishonest.

Rogue Lawyer opens with Rudd defending a client who appears to be guilty, but is in fact not. The evidence is circumstantial at best, if not entirely fiction. It’s the perfect introduction to Rudd; a case where he is actually defending an innocent man. It immediately gives him credence and conjures readers’ respect. Then the novel flits between various other cases – some very personal, others showcasing the reality of his profession; the majority of his clients are guilty, many of heinous crimes. These are not nice people, and by interacting with them, Rudd is welcoming evil into his life.

The novel has an episodic design; it is split into several chunks, which feel like episodes in a season of a television drama. There is a unity to these – the novel’s climactic scenes pull together various threads into a powerful and affective conclusion – just like any finale of a TV series should do. But it is initially jarring, suggesting perhaps that Rogue Lawyer was initially conceived as a series of short stories to be read at intervals rather than in one sitting.

John Grisham flexes different muscles in Rogue Lawyer. It is packed with the legal jargon and supreme storytelling long-time readers expect; but the tension is notched to an even higher level, and his prose is starker than ever. Rogue Lawyer is a brilliantly stripped down legal thriller packed with tension and velocity.