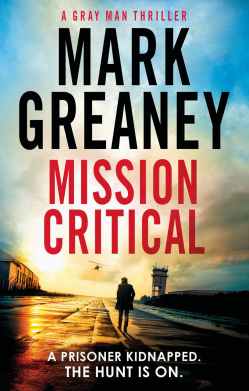 A crisp, unpretentious action thriller packed with extravagant shootouts, in which the bad guys are the very worst, but the good guys are always that little bit better. In the world of action lit, Mark Greaney’s ‘Gray Man’ is up there Mitch Rapp, Jason Bourne and Orphan X.

Mission Critical, the eighth book in the series, sees Court Gentry — aka “Violator,” aka “the Gray Man” — involved in a CIA-sanctioned mission to stop a diabolical plot conceived by a pesky Russian sleeper agent, and a North Korean scientist, involving weaponised pneumonic plague and a meeting of the West’s key intelligence personnel. Aided by Zoya Zakharova and Zack Hightower, Gentry finds opposition in the form of not only weapon-wielding henchmen, but CIA and British Intelligence moles, too.

No points for subtlety, but Greaney knows precisely what his audience wants, and is more than happy to deliver. He is a writer of cinematic talent, whose pedal-to-metal style of storytelling will leave you breathless. It is the literary equivalent of sitting down to watch the latest Mission Impossible blockbuster. 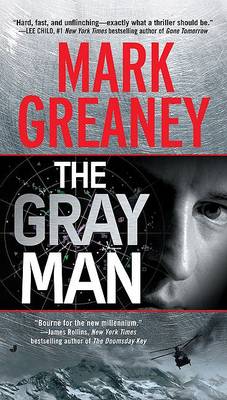 Mark Greaney’s The Gray Man is as satisfying as any wide-screen Hollywood blockbuster, its superbly choreographed and adrenaline-fuelled action scenes enhancing the thriller’s thin plot. It’s heavy on familiar tropes — the assassin with a conscious, spurned by his government overseers, now targeted for elimination by, well, just about every professional killer in the business — but this first book in a series that has now reached its sixth entry is fast and furious, and a sure fix for thriller junkies.

Court Gentry is known as The Gray Man in clandestine circles: a proven killer who moves silently from job to job, accomplishing the impossible, then fading into the background. But when a job goes awry, he finds himself up against impossible odds: a fleet of killers who will do anything to bring his head to their employer. Stripped of equipment and weapons, wounded and adrift, Gentry faces off against opposition forces in Prague, Zurich and Paris, pulling off miracle escape after miracle escape. Bashed and blooded, things come to their violent climax in a chateau near the Normandy coast.

Fans of Tom Clancy and Robert Ludlum in their pomp will find plenty to enjoy here. The Gray Man isn’t going to make new friends of the genre, but for acolytes, this is superb. It’s a blast. 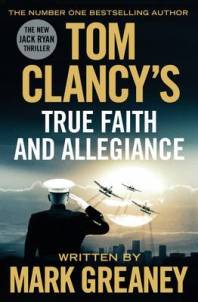 Above all else, Tom Clancy’s novels garnered mass readership because his plots were either ripped from the headlines, or prognostications of headlines-to-come. Since taking up the mantle of penning the continuing adventures of characters based in the Jack Ryan universe, Grant Blackwood and Mark Greaney have maintained the author’s legacy. Their Jack Ryan novels, like the series’ originator, are rich in technical detail, stuffed with rote “Hooah” characters, and loaded with high-stake gunfights, high-risk espionage operations and political double-crosses. While modern thrillers have become leaner and meaner, Clancy’s novels have fortified their own distinct place in the genre by maintaining the hallmarks that popularised them in the first place. And Mark Greaney’s Truth Faith and Allegiance is a damn fine Tom Clancy novel, and a great addition to the Jack Ryan canon.

When Romanian hacker Alexandru Dalcu unearths a U.S. Office of Personnel Management file containing American security clearance applications, he uses his techno-skills to “weaponise” the data and effectively turn it into a hit-list for American’s enemies; essentially a rolodex of low-level and high-level government officials. A rogue Saudi pays Dalcu to construct a list of key American anti-terror fighters, and sells the information to ISIS, who recruit “cleanskins” — radical sympathisers unknown to the security services – – to attack targets within the United State’s borders. So the shit has seriously hit the fan, and what follows are increasingly brazen terrorist attacks on important personnel. Jack Ryan Jr. — son of former Clancy hero and now president Jack Ryan — alongside his comrades at the black-ops unit run by Hendley Associates known as “the Campus” — are tasked with bringing an end to the attacks.

Truth Faith and Allegiance is chock-full of the features that made Clancy’s works so successful: meticulous military detail, war heroics, and nail-biting action. There are moments you’ll wish the prose could be tightened, and a few scenes streamlined, to bring the next stunning action sequence to the page sooner, but there’s no doubt about it: Mark Greaney is the perfect successor to the big man himself. Even more impressively, Truth Faith and Allegiance has encouraged me to pick up Greaney’s non-Clancy affiliated work. This is a highly satisfying thriller that won’t sway the naysayers, but will satiate longtime fans, and other readers searching for a geopolitical/techno thriller to wile away the hours. An eminently readable, highly enjoyable romp. 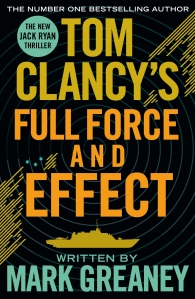 Mark Greaney’s first solo outing as the steward of Tom Clancy’s long-running Jack Ryan series, Full Force and Effect, offers a deftly fictionalized reproduction of contemporary real-world geopolitics. Under the leadership of Choi Ji-Hoon – the embodiment of Kim Jong-Un – North Korea has plans to extract a rich deposit of rare minerals, thereby granting the nation an unfathomable amount of hard capital that would enable their ability to purchase nuclear weapons and influence key figures of the United Nations. But sanctions vaunted by the United States threaten to derail the supreme leader’s planners, leaving only one option: the elimination of President Jack Ryan.

There’s more to it, of course: a wildly convoluted plan comprised of various factions, some of whom are entirely cognizant of their roles, while others operate in the dark. Jack Ryan Jr. and his cohorts at The Campus enter the fray following the murder of a veteran CIA officer. Their investigation leads to some pulse-pounding confrontations and shoot-outs as they untangle the plot, the highlight of which sees Ryan Jr. facing off in a battle of wits with a female spy as his colleagues rush to fulfil the basic fundamentals of his undercover identity. Greaney crafts these scenes with aplomb, shedding the gracelessness and textbook-like lingo present in the late Clancy’s novels. There’s little room for character development, and good luck extrapolating an impassioned thought from the novel’s gigantic cast – that’s not what Clancy was famed for, and it wouldn’t make sense to change the formula that earned him a legion of fans.

Full Force and Effect is a plot-driven technothriller, and a worthy addition to the Jack Ryan canon. Detractors won’t be swayed, but long-time readers will be wholly satisfied. With Greaney at the helm, there’s plenty of life left in the Clancy universe: indeed, perhaps this is the initiation of a renaissance.