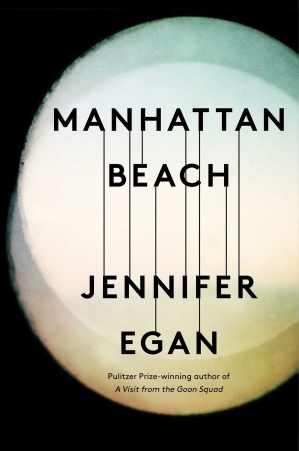 Pulitzer Prize-winning author of A Visit from the Goon Squad, Jennifer Egan, returns after a seven year sabbatical from our bookshelves with her first work of historical fiction, Manhattan Beach, which perhaps lacks the unequivocal uniqueness of its award-winning predecessor, but nonetheless displays her gifts as one of today’s most elegant and versatile storytellers.

Manhattan Beach opens during the Great Depression with almost-twelve-years-old Anna Kerrigan accompanying her father to the house of New York gangster Dexter Styles, where the two men talk conspiratorially while Anna and Style’s daughter play. Unbeknownst to Anna, Styles will have a significant impact on her life.

Smash-cut to almost a decade later and Anna’s father Eddie has disappeared, leaving Anna, her mother, and her ailing, disabled sister to fend for themselves in the midst of World War II. Anna is the family’s sole provider for the family, breaking gender barriers by working at the Brooklyn Navy Yard as the first female diver; a most perilous occupation. By chance she visits a nightclub owned by Dexter Styles, and when the two re-connect, Anna digs into her father’s ambiguous past, and the events that lead to his disappearance.

Egan’s irresistibly engaging characters and crystalline prose augment an otherwise conventional narrative, which forsakes much of its tension early on, when it answers the novel’s burning question: what happened to Eddie Kerrigan? Therefore Manhattan Beach rips along not because of a central mystery, but the often heartbreaking internal struggles of its characters seeking to transcend their station in life. The novel deftly illuminates issues of class, race and gender, as well as wartime mortality, Egan’s penchant for arduous research coming to the fore as she details now-archaic diving equipment and experiences.

Rich with colourful historical detail, Manhattan Beach is a masterly examination of a monumental time in America’s history.