Who better than Becky Albertalli and Adam Silvera to excavate the emotional turmoil of two adolescents as they seek to make the most of their summer romance? Honest and hilarious, unflinching and unapologetic, What If It’s Us is a heart-warming, heart-wrenching, and altogether life affirming tale about young love.

When Ben and Arthur cross paths in a New York Post Office and fail to swap contact information, both regret the missed opportunity. Ben — a Puerto Rican, Catholic, and native New Yorker — is recovering from a recent breakup with a friend-turned-boyfriend, and embarrassed about attending summer school, which his ex is, of course, also attending; thanks, universe. Arthur is a white, Jewish, Broadway–loving guy with ADHD who has never been kissed, but is a true romantic and heart — and only in New York for the summer. So there’s a lot to suggest a romance between the two wouldn’t work out, never mind the fact they’ve little to go on in order to find each other again. But that’s exactly what they do.

What If It’s Us plays out like most summer romance stories. Some readers will be able to chart its plot, from beginning to end, expecting the highs and lows of Ben and Arthur’s blossoming relationship. But the book shines because of its characters; their honest depictions, their realness; and not just the protagonists, but their families and friends, too. The narrative snaps back and forth between Ben and Arthur’s perspectives, the sharp, economical, witty prose — chock-full of pop-culture references, obviously — making it a real page-turner. And of course, Silvera and Albertalli aren’t afraid to deep-dive into some heavy themes and explore the complexities of relationships, both romantic and platonic.

This is a wonderful novel; touching, funny and big-hearted. You’d expect nothing less from Silvera and Albertalli on their own. Combined, they’re inimitable.

Becky Albertalli follows up her brilliant debut Simon vs. the Homo Sapiens Agenda with a fresh and poignant adolescent love story starring eternally lovelorn seventeen-year-old Molly Peskin-Suso. Set against the backdrop of the legalisation of gay marriage in America and the planning of her mothers’subsequent nuptials, The Upside of Unrequited is a heartfelt and bittersweet reminder of the pain and exhilaration of first love.

The Upside of Unrequited works because of its characters. There is never any doubt as to the story’s endpoint; this is a universal tale of burgeoning romance, of choosing the right guy over the obvious one, and overcoming your insecurities and being comfortable with who you are. What makes it stand out is its diverse cast, and the deftness with which this diversity is handled.  Albertalli doesn’t overemphasize her characters’ sexual orientation, ethnicity, mental health or size; they’re just elements vividly melded into her story. Every character is well-drawn and relatable.

Molly’s teen angst might prove grating for some readers — it’s tuned to the nth degree, intentionally so — but thankfully before it gets too much she finds a dose of confidence, and the plot shifts into a different gear, and instead of focusing on a possible romance, it becomes about managing newfound romance.

The Upside of Unrequited is a searingly honest book about the power and beauty of first love; and the turmoil involved in discovering it, and accepting it. It deals with some heavy themes and big issues, but never at the expense of its characters. Becky Albertalli’s second novel is another winner. 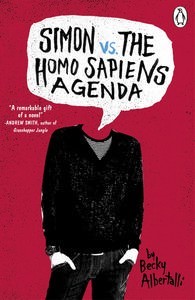 Simon vs. the Homo Sapiens Agenda is one of the finest high school romance novels I’ve had the pleasure of reading. It’s an honest, occasionally awkward, sometimes heart-wrenching, often hilarious, and completely captivating portrayal of the complicated lives of teenagers. That the relationship in question is of the same-sex variety underlines the irrelevance of sexual orientation. Becky Albertalli’s debut reminds us that love is true, and pure, and boundless, and that whether you’re gay, or straight, or undecided – however you choose to describe yourself – we all have, or will, struggle through an identity crisis at some point in our lives, as we seek to define ourselves. That’s what binds us together. That’s what unites us.

Ostensibly, Simon vs. the Homo Sapiens Agenda is about a gay teenager – Simon – who comes out to his parents, friends and classmates after his covert correspondence with a mysterious boy is discovered. Albertalli doesn’t take the obvious route, however, and make her story’s focus Simon’s outing. Of course, it’s a vital element, and it’s infuriating witnessing Simon forced to deal with this cruel exposure; but Simon is comfortable with his sexuality, despite uncertainly about how his friends and family will react. He’s not confused about with his sexual identity, but he’s concerned about what it means beyond himself; how the ripples of this revelation might affect, if at all, those he’s closest to.  The more prominent issue on his mind is that of the mysterious ‘Blue’ – his secret anonymous admirer, the boy he’s been emailing on a daily basis for weeks, and who he’s developed quite the crush on.

Simon’s communiqué’s with ‘Blue’ – the banter, the innuendo, the awkwardness – reminded me of my initial contacts with high school crushes. Is the connection mutual? Does she feel the same way about me as I do her? Am I even sure what I’m feeling? I’m acutely aware I’m a teenager, that very special breed of human who is prone to abnormalities. When you’re in love with someone at that age – or perceived love, as is how it often turns out – they become your obsession; other relationships fall to the wayside as you put all your hopes and dreams into this one person. The beauty of Simon vs. the Homo Sapiens Agenda is how Albertalli depicts the fallout of Simon’s blossoming relationship among his closest friends; in some instances it binds, in other cases it disrupts.

Simon is a wonderful protagonist. He’s equal parts cute, awkward and hilarious, as we all are in our own ways. But we never forget he’s a kid, and at that phase in his life where the brittle pieces that he’s comprised of are hardening; he’s gradually solidifying into the man he’ll turn out to be, and that process involves missteps and miscalculations. Albertalli’s account of these is so true to life, and so emotionally honest. It’s a hugely impressive feat, and such a delightful read.