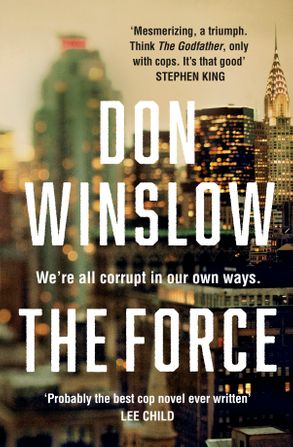 The Manhattan North Special Task Force operates by one primary principle: if you don’t intimidate the street, the street will kill you. Which means you’ve got to work outside the law to maintain it. And to keep the peace, you broker deals. You can’t exterminate crime, so you work with the gangs. You maintain a status quo. You get dirty, but you don’t get bent. You walk right up to the line, but you don’t cross it. Until the day you do.

“The Force” is Don Winslow’s epic novel about an elite NYPD task force. It’s savagely violent and unambiguous in its portrayal of corrupt cops, so overwhelmed by their toxic egos and merrily lining their pockets, they’ve forgotten why they became police in the first place. If they’re not entirely morally bankrupt, they’re down to their last cents. Their decision to skim $4 million and 20 kilos of heroin from the scene of a major bust is the most extravagant of their wrongdoings; the coup de grâce before their fiefdom crumbles. And as it falls apart, readers learn just how far the corruption extends.

Winslow does a good job of establishing his characters in their own lives. Events are narrated through Detective Sergeant Denny Malone: Irish American, son of a cop, who grew up in Staten Island, whose brother was a firefighter who died on 9/11. Malone’s also in the middle of a protracted divorce, and in a new relationship with a black, drug-addicted nurse. But the nature of the tale is that its characters’ ambiguities are lost as it gathers momentum. When the FBI starts squeezing Malone for information, turning him into a rat — the thing he most despises — I was eager to see how he could possibly extricate himself from his predicament. But I wasn’t emotionally invested in his survival, because to be frank, Malone is a bad guy, and deserves to go down for his crimes. It makes for a peculiar reading experience, rooting against the central character of a book. But it’s not a feeling I marinated on, such is its velocity.

“The Force” is punctuated with blockbuster action scenes. Punchy sentences and short paragraphs make these sequences kinetic and frenetic. They read like a crude, bloody ballet. Impressively Don Winslow takes a derivative concept, shakes it, and gives it new energy. “The Force” is terrific entertainment. A cop novel only he could write.