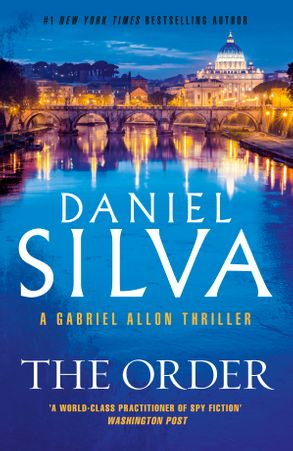 The work of novelist Daniel Silva is inextricably linked to current events, his thrillers either ripped from the headlines, or frighteningly prescient. As his hero Gabriel Allon has ascended to the head of Israeli intelligence, the scope of Silva’s novels has expanded.  His recent fiction has explored Islamist extremism, the diminishment of the United States as an intelligence powerhouse, and the rise of Russian influence. His twentieth novel in this long-running series is smaller in scope, but with ramifications just as significant: a murder mystery in which the victim is Pope Paul VII.

Following the death of the Supreme Pontiff, Allon is whisked away from his family vacation in Venice to meet with the pope’s personal secretary, Archbishop Luigi Donati, who is adamant the Holy Father did not die of his purported natural death. Allon investigates, and uncovers the secret machinations of a secret right-wing cabal with toxic influence throughout Europe, who are determined to uncover the lost Gospel of Pilate, which offers revelatory new information on Christian anti-Semitism.

“The Order” is steeped Catholic history. Much of the joy comes from ascertaining how much of what we’re reading is accurate and factually based, and how much is dramatic license. Forget the girls, guns and gadgets of Bond and the exaggerated combat of Bourne. This is a thriller without most of the genre hallmarks Hollywood has set in stone, and it’s all the better for it. Maximum intrigue, minimal gunfire: Daniel Silva is le Carré class. You won’t read a better spy novel this year. And most importantly, for longtime readers, there are hints to what’s next for Allon, when his life as a spy reaches its inevitable conclusion.