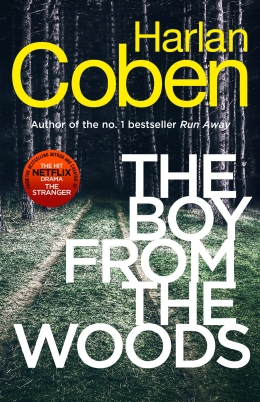 Although it’s comprised of incongruent components — the unconventional, enigmatic, titular boy (now man) from the woods, seems oddly shoehorned into this ripped-from-the-head-lines plot — there’s no denying Harlan Coben is the master of the wickedly seductive , twist-filled, stay-up-all-night thriller.

The Boy From the Woods introduces former soldier and private investigator, Wilde. That’s not his real name; you see, decades ago, when he was a mere boy, Wilde was discovered in the New Jersey backwoods, living a feral existence, with no memory of his past. And despite attempts by friends and his adoptive parents to indoctrinate him into the “real world,” Wilde prefers living alone, off the grid, unshackled by societal constraints. So, Jack Reacher in the woods, essentially.

Wilde is plucked from his solitude by his troubled godson, Matthew Crimstein. Matthew’s worried about his bullied classmate, Naomi Pine, who has gone missing, and he’s turned to his grandmother, powerful attorney Hester Crimstein, for help; who has come to Wilde for help, since this plot needs a protagonist. Wilde learns Naomi’s classmate, Crash Maynard, is responsible for the majority of her bullying; and that his father, Dash Maynard, is best pals with reality TV star–turned–presidential hopeful Rusty Eggers; and who may or may not have some incriminating video recordings that could destroy his  friend’s candidacy; which may or may not be connected to Naomi’s disappearance (and a subsequent kidnap, of another child; no spoilers!).

Subplots and red herrings abound; The Boy From the Woods has Coben’s trademark twists and turns, but this time his hero lacks the heart and genuineness of, say, Myron Bolitar.  Wilde’s an offbeat character, whose origin sounds fascinating on the blurb of a book, but it’s not really fleshed out enough here, and he feels tacked on to a tale that doesn’t really need him. Hester Crimstein could’ve been the protagonist of this story. She’d kick less ass, presumably — Hester’s a sixty-something lawyer, after all — but I think she’d be a superior anchor. All that said, Coben’s the master at annihilating hours in your day, and this one makes for perfect airplane reading.