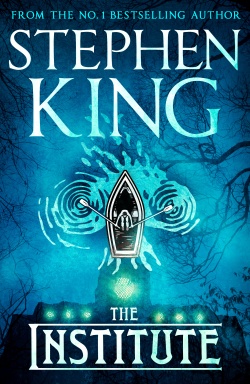 Lately Stephen King has seemed determined to thrill rather than chill, forsaking the spine-tingling spookiness of his seminal (and my favourite) books — hello, Pet Sematary; hi, It; good to see ya, Cujo! — in favour of telling exhilarating, completely absorbing, rollicking reads, replete with the kind of dazzling pyrotechnics and fantastic characters only he could conjure. The Institute is exactly that: a masterclass of entertainment, in which paranormally blessed kids are conscripted into a secret government lab in Maine (naturally) and forced to endure horrific tortures.

The book opens with Jack Reacher-like wanderer Tim Jamieson — ex-(decorated) cop — taking a job in the small South Carolina town of DuPray. King lays all his cards on the table: this guy is going to be a hero. We’re rooting for this guy. The question King dangles is, what force is he up against? We don’t get an immediate answer. Instead, smash-cut to Minneapolis, where the super-intelligent Luke Ellis is kidnapped from his own home while his parents are murdered, and transported to the facility known as ‘the Institute,’ run by the evil Mrs Sigsby. After the first hundred pages, readers know Luke and Ellis’s paths will cross: but when, and how? And what will the ramifications be?

Cancel all your plans and settle in for the ride. This is escapism at its purest and finest.