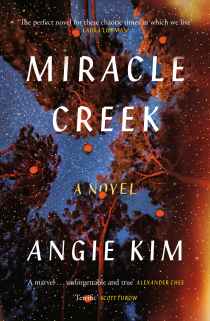 Finally, a legal thriller with something to say, infused with more than just rudimentary courtroom drama and token plot twists, that positively glows with ambition and scope as it tackles weighty themes of parenthood, justice, guilt,  immigration, and the precariousness of truth. Angie Kim’s Miracle Creek is electrifying; a much-needed jolt to a stagnant genre; as literate and thoughtful as it is fast-moving and relentless.

Young and Pak Yoo live in Miracle Creek, a small town in Virginia, with their teenage daughter, Mary. After immigrating to Virginia from Seoul, they start a hyperbaric oxygen therapy (HBOT) business that operates in the barn behind their home. Treatment involves sitting in a chamber — referred to as the “submarine” — and breathing pure, pressurised oxygen. The theory is, because damaged cells need oxygen to heal, extra oxygen can result in faster healing of a variety of conditions, including cerebral palsy, male infertility and autism.

Miracle Creek opens with Young Yoo narrating her version of events on the night of the fatal explosion at the submarine, that left two people dead, her husband in a wheelchair, Mary permanently scarred, and others seriously injured. It then cuts to one year later, and the beginning of the murder trial of Elizabeth Ward, who has been accused of starting the fire that lead to the explosion in order to kill her eight-year-old son Henry, who was undergoing HBOT for his autism. The narrative jumps between various characters, and flits back and forth between the night of the explosion and the present, exposing the true events of that night, and the culpability of everyone involved in the tragedy, directly and indirectly.

Bold and devastating, Miracle Creek is a must-read revitalisation of the legal thriller itself.