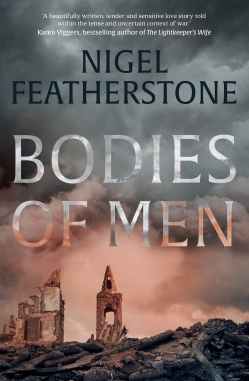 Unafraid of emotion, though without a moment of wretched sentimentality, Bodies of Men magnificently conveys love, courage, endurance and comradeship straining against the cataclysmic backdrop of World War II. With unobtrusively elegant prose, Nigel Featherstone has crafted a vidid evocation of the arduous complexities of love between two men inured by the traumas of conflict. The result is something very special indeed: equal parts compelling, harrowing, and tender.

The book opens in Egypt, 1941. Mere hours after disembarking in Alexandria, William Marsh, a twenty-one-year-old Australian corporal, finds himself engaged in battle with the Italian enemy, and unable to squeeze the trigger and end a life. Incredibly, William is saved by James Kelly, a childhood friend from Sydney; the two men have always shared a lingering affinity, but despite their reunion, their assumption is they will each move on, serving their country, separately, living in each other’s memory. But despite their divergent paths — William is dispatched to supervise an army depot in the Western Desert, while James Kelly goes AWOL with an unusual family with deeply-buried secrets — fate thrusts them back together in the unlikeliest of circumstances.

Bodies of Men holds the reader from first page to last. With exquisite artistry, Featherstone writes about people trapped in a tragic situation struggling to reconcile their responsibilities and desires.

3 thoughts on “Review: Bodies of Men by Nigel Featherstone”