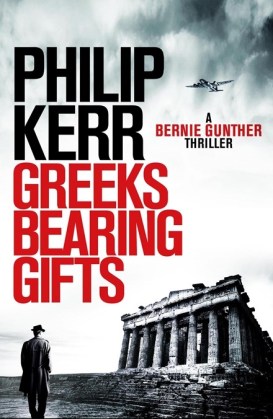 At the stage of his career when many other thriller writers struggle for new ideas or settle on conventional, repetitive plots, Philip Kerr continues to crank out electrifying, utterly addictive novels of suspense.

The thirteenth book in Kerr’s long-running series, Greeks Bearing Gifts opens in Munich, 1957, with Bernie Gunther, the one-time Commissar of the Murder Commission, now working under the pseudonym “Christof Ganz” as a morgue attendant, desperately trying to leave his past behind, and live whatever remains of his future in relative peace. But the past is something that won’t let go, and it reappears in the form of a dirty cop, and a lethal trap, which Bernie escapes, though barely. Thrust into a new career as a claims adjuster for a prominent insurance company thanks to the influence of powerful attorney Max Merten, Bernie is dispatched to Athens to assess the sinking of a ship. But his simple mission turns into something far more dangerous when he discover’s the ship’s owner, former Wehrmacht Navy man Siegfried Witzel, shot dead through both eyes. Compelled by the Greek cops to investigate, Bernie’s once again drawn back into the dark history of WWII.

Inspired by real people and events, Greeks Bearing Gifts is emblematic of why Philip Kerr’s Bernie Gunther books are far more than a guilty pleasure. There’s the central mystery to unravel, of course, and plenty of nerve-shredding tension along the way; but there’s always another layer to Kerr’s work, in this case an exploration and analysis of Adenauer’s amnesty for Nazi war criminals, and Bernie’s struggle to fit into this new Germany and its willingness to move on from its checkered past.

Brilliantly composed and elegantly constructed, Greeks Bearing Gifts is a masterful historical crime novel, and leaves Bernie Gunther in a tantalising place for the future that will assure readers this is not the end of our journey with one of the finest anti-heroes in literature.