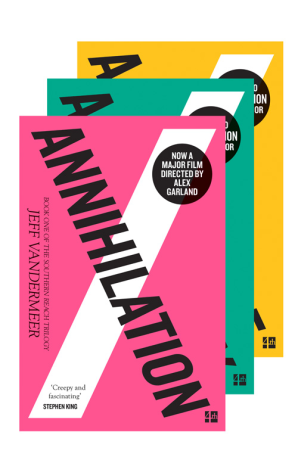 Back in 2014, when The Southern Reach trilogy was published, two of my colleagues at the bookshop I worked at would debate the series with varying intensity. Annihilation, if memory serves correctly, was agreed upon as the best instalment, in which four female scientists — a biologist, a surveyor, an anthropologist and a psychologist — journey into the unknown as part of the twelfth expedition into a cordoned landscape named Area X. The question being debated behind the counter at the bookshop was whether its two sequels augmented or diluted the brilliance of Annihilation. Four years later, I’m too late to join that debate, but have embarked upon my own journey of discovery, compelled by the impending release of the film adaptation starring Natalie Portman.

I am not a connoisseur of speculative fiction. I read, maybe, half a dozen science fiction novels a year, and rarely touch the fantasy genre. There’s a joke around the bookshop: “if it has dragons, Simon won’t read it.” But Annihilation doesn’t feature dragons, and it’s bite-sized, a couple hundred pages, which are two things immediately in its favour. Things aren’t explained in Annihilation; they’re experienced, which is a fine distinction. The narrative is framed as the biologist’s journal, and it possesses an uncanny eeriness that lingers long after the book has ended. There’s a level of ambiguity other writers might not get away with, fuelled by a desire to detail the amazing world they’ve constructed; Vandermeer is happy to paint his portrait languorously and leave certain elements inconclusive.

The prose is perfunctory rather than lavish, intentionally so. Again, this is a story told from the perspective of a scientist, who details her observations with clear-cut crispness. At first, its relative dryness bothered me; I found the protagonist difficult to relate to, as we’re barely provided glimmers of her personality. As the novel continued, I understood its intention; once I accepted its style, I enjoyed it all the more.

As the start of a trilogy, Annihilation does precisely what it needs to: leave an impossible number of questions unanswered, but at the same time, confident in the author’s ability to explain everything. I’m incredibly fascinated to see how Alex Garland adapts the source material.