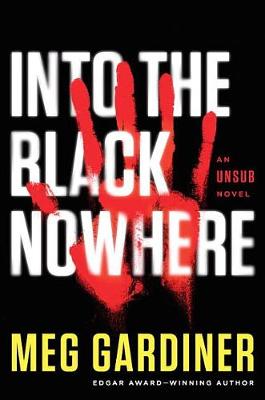 Darkly and extravagantly imagined, full of pulse-pounding action and brutally emotional highs and lows, Meg Gardiner’s UNSUB was a tremendous work of suspense fiction, and my favourite thriller of 2017. Its sequel, Into the Black Nowhere, doesn’t quite reach those same heights, lacking the character depth and intricate plotting of its predecessor, but is nonetheless a breakneck ride from first page to last. Gardiner steps on the gas early, and it’s pedal to the metal until the very end.

This time round Caitlin Hendrix of the FBI’s Behavioral Analysis Unit is tasked with hunting down the Texas-based ‘Saturday Night Killer’. Disturbingly adept at abducting women from seemingly safe venues, somehow gaining the trust of his victims before brutally dispatching them, the killer is identified by Hendrix and her peers in the opening hundred pages of Into the Black Nowhere, sacrificing mystery for the suspense involved in trying to get under his skin and indict him. Just when you think things are wrapping up a little too neatly and succinctly, the Saturday Night Killer escapes custody, planning revenge on those who helped play a role in identifying him. And as fast as Hendrix’s FBI unit is, the killer is even faster; impossibly so. Could the killer have an accomplice?

A furiously-paced tale that you’ll devour in a single go, Into the Black Nowhere is replete with bloodshed, mayhem, and twists. Meg Gardiner’s prose will draw you in, her short, sharp chapters ratchet the tension, and the payoff lands like an unexpected punch to the stomach. This is turbocharged entertainment, pure and simple.