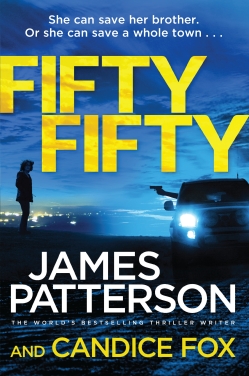 Crimson Lake — published earlier this year — remains one of the best crime novels of 2017. It boasted — (well, still does, even if you’re reading this in 2021, so why am I using past tense?) — Candice Fox’s signature style, edge and humour that made her one of my Must-Read Authors, surpassing the brilliant Bennett / Archer trilogy. And though I was disappointed with her inaugural collaboration with James Patterson in 2016’s Never Never — it read like a diluted pastiche — I remained hopeful its follow-up, Fifty Fifty would be less Patterson-like, and more Fox-y. And I’m delighted to report: it’s a huge step up. Nowhere near the genius of Crimson Lake, but a solid page-turner, with a climax that promises another sequel, with greater stakes.

Never in doubt was Harriet Blue’s potential as a great lead for a long-running series.  Tough-as-nails, a more than capable brawler, with a never-say-die attitude and a thirst for justice. Damaged, too, as the best protagonists are; emotionally warped from a youth spent drifting between various Child Services homes, sometimes with her brother, sometimes not; her mother a drunken, broken, ethereal presence. Trouble is, in both Never Never and Fifty Fifty, she’s never really given the chance to assure readers of her investigatory prowess. Both novels suffer from a nasty knack of shunting Blue into precarious situations, solving cases not through smarts, but because of happenstance; bumbling into danger, or becoming the target of the overarching villain. This builds suspense, sure; nerve-shredding moments when her life — or someone else’s — is on the line; but makes me question her actual, y’know, detective skills.

In Fifty Fifty, the detecting is left to Sydney Detectives Tox Barnes and Edward

Whittacker, who — following Harriet’s reassignment — are determined to uncover the true identity of the Georges River Killer. Harriet’s brother, Sam stands accused of the brutal murders of three young students, but she is adamant he’s not the killer, despite both siblings sharing a penchant for aggressive outbursts. Harriet would be there with them, on the frontlines, but one such act of aggression — punching Sam’s prosecutor in the face — has forced her out of the spotlight, to the outback town of Last Chance Valley, to investigate an unknown suspect’s plan to massacre the entire town, alongside Federal Agent Elliot Kash and local cop Victoria Snale.

These parallel investigations are suitably intriguing, Patterson and Fox handling dual cases with professional dexterity. The result isn’t exactly memorable, but with its short, sharp chapters and rapid-fire plotting, readers will race to the cliff-hanger conclusion. You’ll see hints of Fox’s trademark strengths, paled by the Patterson effect; characters who deserve fleshing out reduced to caricatures for the sake of expediency; my eyes nearly rolled out of their sockets when Kash and Harriet wrestle — actually wrestle! — for control of the investigation. But James Patterson’s fans are legion, and Fifty Fifty is certain to sate readers of a particular brand of storytelling.

One thought on “Review: Fifty Fifty by James Patterson and Candice Fox”