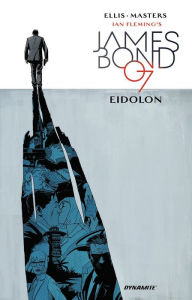 Despite the exemplary creative team attached, the first volume of Dynamite Entertainment’s James Bond relaunch flattered to deceive. It was  packed with the staples Bond fans expect — shoot-ups, car chases, deadly cybernetically-enhanced henchmen, to name but a few — but lacked that special something. Less akin to Casino Royale, and more like Spectre. Thankfully volume 2 — produced by the same creative partnership of Warren Ellis and Jason Masters — rectifies the first’s missteps, and outdoes its predecessor in every way.

As dirty money is being laundered through MI5 — the United Kingdom’s domestic counter-intelligence and security agency — the Secret Intelligence Service has been neutered and disarmed. ‘Eidolon’ — another word for ghost, or spectre — has infiltrated the highest levels of British intelligence, and it’s up to Bond to terminate their operation. It’s a simple set-up, as the Bond novel plots have been since day dot, when Fleming wrote Casino Royale; but it means the creators get to focus on perfectly-choreographed, wide-screen action sequences, including one terrifically rendered car chase. There’s a dash of sex, plenty of thrills, and even features a visit to Q Branch, although there’s a distinct lack of high-tech gadgetry.

Ellis lets Masters take charge during the action scenes, limiting dialogue, allowing  these blockbuster moments to occur in silence. Masters pulls it all off with aplomb. It is brutal and visceral, but not gratuitous. But when Ellis does have the characters interacting, he nails their repartee. This is a tight script, full of great one-liners and scything commentary. One moment in particular had me chuckling, when Bond dumps a gun in a bin during an escape, and his companion asks: “You’re going to leave a loaded gun in a bin?” Bond’s reply is perfect: “It’s America. I don’t have time to give it to a child or a mentally ill person, so I’m leaving it in a bin for them to find.”

It is a shame, then, that with Eidolon, Ellis and Masters bid adieu. Just as they hit their stride and manufactured the perfect contemporary James Bond adventure, they’re gone. Still, what an exit. Any comic book reader with even a remote interest in 007 will dig this volume; so, too, any readers looking for a standalone action thriller.