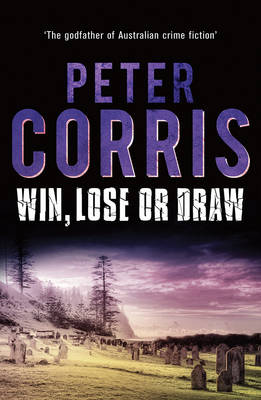 Win, Lose or Draw is the 42nd and final book in the long-running Cliff Hardy series, and is Peter Corris’s last novel (the reasons for which you can read about here). And while I’ll certainly miss my annual summer sojourns with the Aussie private detective, there’s something immensely satisfying about an acclaimed series ending on a high note. There’re no unnecessary theatrics to mark ‘the end’;  the final scene is not of Cliff clutching his chest as his troublesome heart finally beats its last. Win, Lose or Draw simply epitomises what has made the Cliff Hardy series resonate, and what’s lead to Corris being named the grand master of Australian crime fiction.

Win, Lose or Draw amalgamates some fairly well-trodden PI tropes — a missing girl, drugs, yachts, and the sex trade — into a finely-tuned, utterly compelling mystery. Hardy follows a trail from Sydney to Norfolk Island, Byron Bay, Coolangatta, and back again, utilising unlimited expenses thanks to the girl’s father; Gerard Fonteyn, a wealthy businessman, who is desperate for the safe return of his daughter. Hardy comes up against some hard-hitting gangsters, corrupt cops, and gradually unravels the truth behind Juliana Fonteyn’s disappearance.

Peter Corris’s final book moves like a well-oiled machine. It’s polished and primed, boasting the knife-sharp dialogue and wicked humour that the series is celebrated for. There’s no tying-up of loose ends; no callbacks to previous cases, or cosmetic appearances by characters who’ve populated previous novels. Win, Lose or Draw is simply another world-class novel by one of Australia’s best and most consistent crime novelists. Let’s not mourn the fact this is the end; let’s celebrate 42 cracking mysteries.

4 thoughts on “Review: Win, Lose or Draw by Peter Corris”