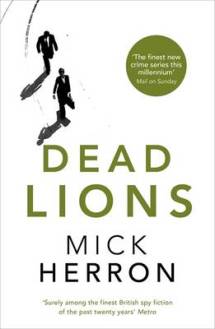 Slough House — a disregarded echelon of MI5 — is comprised of disgraced and incompetent agents, who are assigned an endless supply of demeaning and feckless tasks in an effort to wear them down until the pull the pin on their careers. Ruled by the legendary Jackson Lamb — possibly the most abominable protagonist to have ever been spotlighted in espionage fiction —  the inhabitants of Slough House are skilled operators, whose vices and mistakes have demolished whatever usefulness they might have to the service. But when a former agent, Dickie Bow, is found dead on a London bus, Lamb and his subordinates take it upon themselves to investigate. Bow’s final text message — “cicadas” — has ominous repercussions:  it signifies the awakening of a sleeper cell of foreign agents, which dates back to the Cold War. Suddenly, Lamb’s Slow Horses are in a race against against time to determine their enemy’s target, and stop it from taking place.

Slow Horses was a remarkable spy novel, and this second in the series, Dead Lions, is a fine sequel. With the pieces already set up on the board, Mick Herron wastes no time in thrusting readers into a whirlwind, multi-stranded plot, which is orchestrated with Bach-like precision. Herron’s stories have the same complexity as Le Carre’s, but are written with the economy of Richard Stark, and this combination makes for an incredibly page-turning read. There is a large cast of characters involved, but each are fleshed out, and boast distinctive personalities; a rarity in this genre, when one could easily swap out James Bond for Jason Bourne, or Sean Dillon, or Jack Ryan, and not really notice any discernible difference.

Mick Herron has breathed new lie into the landscape of the espionage novel. I haven’t breezed through a series of books this quickly in a long, long time. As I write this, I’ve started the third novel, Real Tigers, and may well dig into Herron’s other novels while I wait for Spook Street in February.