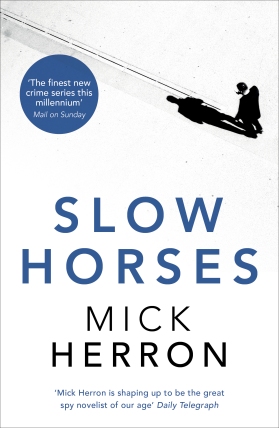 Banished to Jackson Lamb’s personal fiefdom, Slough House, from the higher echelons at Regent’s Park for a variety of shortcomings and vices, the ‘Slow Horses’ are a unit of MI5 misfits, desperate to atone for their past mistakes in order to escape purgatory, not entirely convinced Slough House isn’t an inescapable hell; that whatever they accomplish won’t be enough to circumvent their malpractice.

In erudition, action and temperament, Slow Horses proves Mick Herron is among the top tier of spy thriller writers. I ploughed through this first novel in the series and immediately started the second so I’ll be up to date when the fourth book, Spook Street, is published in February. In Slow Horses a boy is kidnapped and held hostage, and his beheading is scheduled for live broadcast on the internet. Whatever their personal and professional failings, Jackson Lamb’s team — if you can really call them that — can’t just sit on their hands when it’s within their capabilities — well, maybe — to do something. So they break from their remit and get involved. But this isn’t a novel about the redemption of spooks, nor a straightforward action thriller, in which the good guys serve deserved justice to the bad guys, and everyone goes home happy. This is a novel full of greys; it exposes the intricacies of inter-agency turf wars and puts human faces and human costs on those who make it their life’s work to shield us from those who seek to do us harm.

Despite the economy of Mick Herron’s work, the large cast is fleshed out, and although few are likeable — Jackson Lamb, in particular, is a bastard — they’re characters readers will root for, despite their flaws and foibles. Most impressive is Herron’s graceful prose, which reminded me of Daniel Silva’s long-running Gabriel Allon series. There’s an elegance to Herron’s storytelling, rarely seen among his contemporaries, many of whom rush to the explosion without lighting a fuse.

Slow Horses is packed full of evocative detail, movie-tense action sequences, and a credible plot. I’m so glad the book was shoved into my hands. As I write this, I am halfway through Dead Lions and enjoying it just as much as Slow Horses.