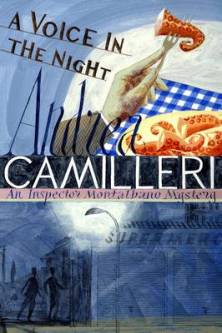 Following a spate of hardboiled crime fiction and blood-soaked thrillers, I was in the mood for something a little different last weekend. Still crime, since I can’t seem to gravitate away from the genre at the moment — I’m entrenched! –but something less intense. I found it in Andrea Camilleri’s A Voice in the Night; the 20th Inspector Montalbano mystery.

I’m familiar with Inspector Salvo Montalbano by reputation rather than experience; maybe even glimpsed a few minutes of the TV show back in the day, though it never seemed my cup of tea. The novel opens with the irascible Inspector’s waking on the day of his 58th birthday — his age and subsequent flagging dexterity plays a key role in proceedings — and quickly presents two distinct cases for Montalbano to solve. The first involves the apparent suicide of a supermarket manager mere hours after he was questioned by police following a robbery. The cops quickly learn of the manager’s mafia connections…

The second case reintroduces a character who appears earlier in the novel — Giovanni Strangio, whom Montalbano had arrested for erratic driving — who reports the murder of his live-in girlfriend. What makes this case even stickier is that Stangio is the son of the province president. So things are going to get political, however the cookie crumbles.

A Voice in the Night is a lighthearted mystery, told with razor-sharp prose. This is a novel about powerful men thinking they can get away with anything — even murder — and one slightly-bumbling detective’s attempt to halt their misdeeds. It’s an easy read, but packed with incident and intrigue. Just the kind of crime novel I was looking for. I wouldn’t call this a knock-your-socks off, standout crime novel, but it’ll keep you enthralled to the final page.I’ll be checking out Camilleri’s backlist for sure.