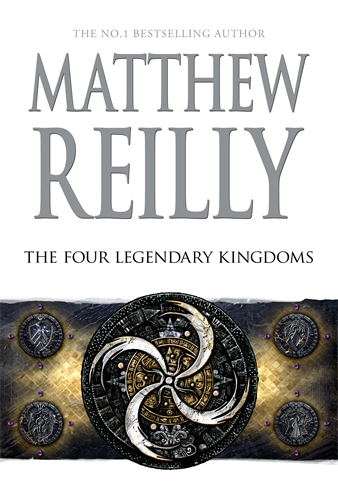 I wouldn’t be such a prolific reader, and certainly wouldn’t be bookseller, if not for Matthew Reilly. Specifically, his book Ice Station, which I read at such an integral stage of my life, around the age of 13, when I was drifting away from prose, and focused almost exclusively on comics. You hear stories like this all the time from his legion of fans; how Reilly’s action-packed books proved to be a revelation for readers, demonstrating that it’s possible to transpose the incredible thrills of summer movie blockbusters to the page. Turns out books can provide the same kind of entertainment. Who knew, right? After Ice Station, Contest, and Temple, during the wait for Area 7,  I read books by Robert Ludlum, Jack Higgins, Dan Brown; the usual band of high-action thriller writers. And eventually, much (much) later, I expanded my “literary horizons” (ugh sorry, that phrase makes me queasy, but it’s for want of something better); started reading crime, then moved onto other genres, eventually dipping into literary fiction. Seems funny to say it, but there’s no way I would’ve read Hanya Yanagihara’s A Little Life –- probably my favourite book (as in, like, ever) — without Matthew Reilly. I owe him a lot.

The Four Legendary Kingdoms begins with Jack West Jr. waking up in an unknown location and immediately thrust into battle. We quickly learn he has been chosen, along with a dozen other elite soldiers (including a very familiar face, much to my surprise and delight), to compete in a series of spectacularly deadly challenges in order to fulfil an ancient ritual with world ending consequences. So, yeah; the stakes, as always, are astronomically high. This isn’t a game West can escape from. For the sake of his loved ones — for the sake of everyone — he’s got to compete.

Reilly delivers fantastic stunts and vehicular mayhem in incredibly creative combat arenas. The plot and characters are ludicrous, but its all stupendous fun, and it moves at the velocity of a speeding bullet. Faster, actually. Reilly rarely lets his readers — or indeed his characters — rest. There are brief interludes between all the thrills, when the unflappably indestructible West gets the chance to lick his wounds, and Reilly gets the chance to feed readers background information. Sure, it can be a little clunky at times  — only Reilly could get away with the sentence, “Vacheron grinned evilly,” and the book is entirely void of subtext — but The Four Legendary Kingdoms is a rollicking blockbuster ride and perfect weekend fodder.

When it comes right down to it, other authors can try (and have tried) to emulate him, but nobody is better at the high-octane-high-body-count thriller than Matthew Reilly. It’s his domain, exclusively. Fans will delight in Jack West Jr.’s return, and of course, plenty of thread is left dangling for the inevitable sequels. Bring ’em on, I say! Perfect beach reading.

2 thoughts on “Review: The Four Legendary Kingdoms by Matthew Reilly”