“It’s a beautiful night and we have a cooler full of beer and a stolen A-bomb. It don’t get any better than that.” 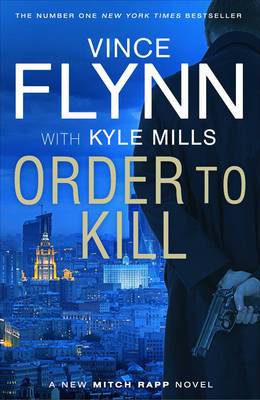 If that sort of nonchalance about nuclear weapons doesn’t gel with your particular sensibilities, Order to Kill might not be the book for you. But if you’re looking for a lean, mean, action-packed geopolitical thriller, look no further. With his second Mitch Rapp novel, based on the late Vince Flynn’s take-no-bullshit, tough-as-nails CIA agent, Kyle Mills proves the series is in good hands.

Following on directly from the events of last year’s The Survivor, Mitch Rapp and his allies are tasked with keeping Pakistani nukes out of terrorists’ hands. But Russian President Maxim Vladimirovich is determined to use these nuclear weapons for his own nefarious purposes: destroying Middle Eastern oil fields to divert revenues to Russia. Naturally he assigns his most capable man for the job:  the super-talented assassin Grisha Azarov, who we’re reminded is every bit Rapp’s equal.

Order to Kill features several entertaining action scenes, all brutal and certain to get your adrenaline pumping. It’s visceral, but not overly gratuitous. Mitch Rapp is every bit the great American Hero, who refuses to conform to bureaucratic standards, even dodging a phone call with the President of the United States at one point. That said, there’re a couple of ludicrous moments when Mills overplays the whole tough guy thing; one that particularly grated (and this is a slight spoiler, so be warned) was Rapp throwing a high-ranking military official out of a helicopter because he disagreed over tactical matters. It would almost be laughable, if not for the novel’s high stakes. And that clearly wasn’t the author’s intent.

The final confrontation between Rapp and Azarov is brilliant; tense and dramatic, and plays out with a nice twist that belies the typical conventions of the genre. Sure, the overall plot plays out fairly predictably, but Order to Kill is a taut thriller, with the expected villainy, cliffhanger-ending chapters, and plenty of shootouts. So, precisely what Vince Flynn fans want from Mitch Rapp’s escapades. Kyle Mills is carrying on that tradition seamlessly.