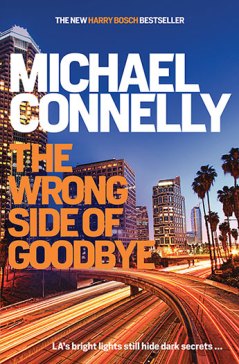 Harry Bosch’s journey with the LAPD came to a fittingly acrimonious ending in the final pages of The Burning Room a couple of years back. But while his departure made sense from a character perspective, I had my concerns for the future of Michael Connelly’s long-running series. We’ve seen Harry leave the LAPD before (which produced one of my favourites Bosch novels, Lost Light) but the blue religion and department politics play such a key role in Connelly’s work. How could Bosch possibly endure?

We got a partial answer with last year’s The Crossing; a rollicking team-up with the Lincoln Lawyer, Mickey Haller. It set up the obvious question: who is Harry Bosch without the badge? And how can he carry on his mission without it? Because working for Haller wasn’t sustainable; not in the long-term. The Wrong Side of Goodbye provides all the answers we need, and sets the series up for the foreseeable future. Bosch’s LAPD years are over, but the character’s best years might still be ahead of him.

The Wrong Side of Goodbye follows two distinct investigations, which unravel around each other but never intersect. One involves mega-wealthy industrialist Whitney Vance, who hires Bosch as a private investigator to locate a potential heir. His other case involves a serial-rapist dubbed the Screen Cutter, which Bosch is working as a part-time reservist for the San Fernando Police Department. Although it’s an unpaid position, it allows Harry the chance to once again wield a badge and carry on his mission, which is all the payment he needs.

The novel delves into Bosch’s Vietnam years, and his early years in an LAPD uniform. While Connelly has touched on these background details in the past, it’s never been to this extent, and he leaves a ton left over to excavate in future instalments. I always wondered whether Connelly might produce a novel set in the Vietnam or just after, focused entirely on Bosch’s war years or his early years with the LAPD; The Wrong Side of Goodbye is a far more nuanced approach, and I hope we see more information drip-fed to us in future books.

Michael Connelly’s latest is another masterpiece of crime fiction. Some authors get to a point where you run out of superlatives for their fiction; Mr Connelly reached that point long ago. The Wrong Side of Goodbye is the standard to which police procedurals should be held. No doubt the author will raise the bar even higher with his next release.

3 thoughts on “The Wrong Side of Goodbye by Michael Connelly”