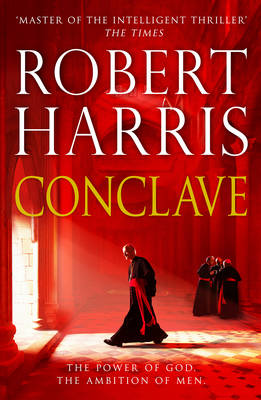 As the title of Robert Harris’s new novel suggests, Conclave is about a hypothetical 2018 papal conclave. After the death of the pope (who, though unnamed, has a lot in common with Francis) the cardinals gather in the Sistine Chapel to vote in his successor. But when you pack more than one hundred ambitious men in a room, each with their own beliefs on how the church should be lead in such tumultuous times, there’s bound to be drama. And Harris delivers in spades: twists, mysteries and complications abound, and form a wonderfully compelling political thriller.

Cardinal Lomeli, Dean of the College of Cardinals, is at the centre of proceedings. His job is to manage the conclave that will elect a new pope — hardly an easy task given the mishmash of strong personalities and beliefs in the room. This is, after all, the ultimate political showdown. You’ve got your traditionalists, those with strong views on the role of women and gay marriage, the liberals who want to modernise the church’s operations and thinking . It seems safe to assume the schisms amongst the papabile are just as seismic in reality, and Harris takes full advantage of such a divisive cast.

The introduction of a cardinal no one has heard of –- Vincent Benítez, a cardinal in pectore, created by the pope in secret  to protect his identity — might seem the biggest complication Lomeli has to deal with. But soon enough he digs up evidence of past and more recent misdemeanours, all of which steer the election process in a new direction. Meanwhile, he is dealing with his own personal crisis of faith, which altogether adds to his likeability, and adds intrigue to what might’ve been a blase character.

Conclave exposes the ancient rituals that constitute the election process, and it’s all very enthralling. Harris doesn’t get bogged down in the minutiae of his research; this is a novel that races along, that’ll keep you turning the pages long into the wee hours of the morning. And even though the ending is sign-posted — the election of the new pope won’t induce too many gasps of surprise — Harris leaves one final twist in reserve until the very end. His new novel is fast, fact-filled, and wholly satisfying; a tour-de-force in ever-tightening suspense.