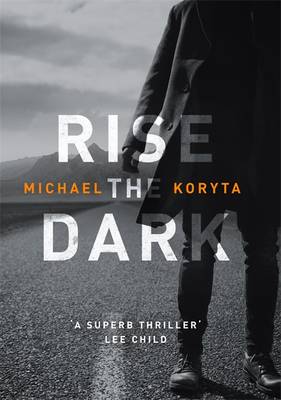 Rise the Dark, the second book in the Markus Novak series, is a masterful suspense novel, replete with crackling prose, nail-biting thrills, and a crackerjack pace. Dangling the plausibility of physic possibility, and pushing its characters to their physical and mental limits, Michael Koryta has crafted a thriller that will induce an unprecedented kind of page-turning compulsivity. In other words, it’s very, very good.

Picking up soon after the end of Last Words, Markus returns to Montana in pursuit of his wife’s murderer, Garland Webb, who has joined a cult hell-bent on bringing down the electrical grid and blaming it on Islamic terrorists. During his pursuit of Webb, Markus meets Jay Baldwin, who has been pulled into the cult leader’s nefarious plans following the abduction of his wife, Sabrina. Jay is a former lineman, whose knowledge of electricity and the grid is essential to the cult pulling off their spectacular feat; and as long as his wife is in danger, Jay will do precisely what they command, regardless of the consequences. Also involved with the cult is Novak’s mother, Violet – a physic reader, whose supernatural proclivities appear to be manifesting within Markus in the subtlest of ways, much to his chagrin.

This hodgepodge of elements is thrown together and seamlessly blended into a damn fine thriller, with high doses of intrigue and tension. Novak’s mission of vengeance gives the novel severe personal-stakes, but the larger implications of the electrical grid going down skyrockets the potential implications of his failure. While Novak’s a fairly flat protagonist, the supporting cast adds much-needed colour and vibrancy. Uncle Larry, Violet’s shotgun-wielding brother, is a particular hit, but kudos needs to go to Kortya for allowing his two female leads to demonstrate genre-defying strength in their captivity. Rather than being utilised as stereotypical damsels-in-distress, and waiting to be rescued, they’re given ample opportunity to flex their sizable muscles, and kick plenty of ass.

With a genuine cliff-hanger that’ll leave you exasperated when you realise you’ll have to wait a year for any semblance of a resolution, Rise the Dark is one of the year’s best thrillers. Koryta is quickly climbing the ladder as one of my favourite authors.

3 thoughts on “Review: Rise the Dark by Michael Koryta”