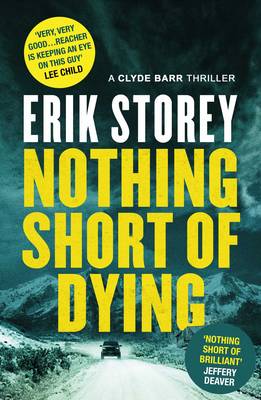 For the pure pleasure of uncomplicated, nonstop action, no thriller this year has come close to matching Erik Storey’s Nothing Short of Dying, the first in what promises to be an adrenaline-fuelled series starring Clyde Barr.

Barr is the latest in a long line of loner heroes with violent pasts that belie their good intentions. Fresh from a stint in a Juárez prison, Barr is determined to make a fresh start, free from the chaos that has punctuated his life. But a frantic phone call from his youngest sister, Jen, halts any plans to ride off into the sunset. Jen needs his help, and as Barr himself asserts – which is a touch on the nose – “nothing short of dying” will stop him from coming to her aid. Problem is, Barr has no idea who has her or where she is. And he embarks on a spree of beat-downs and shootings that put Jack Reacher’s dust-ups to shame. Clyde Barr is a one-man army, as competent with his fists as he is with a rifle or bow. The introduction of Allie – inadvertently drawn into Barr’s violent journey – adds some much-needed emotional depth, and a touch of requisite romance.

Storey brings the rugged outdoor terrain to life, and Barr’s adeptness to life in the wild distinguishes him from the urban-minded heroes that populate most novels in the genre. When we meet Barr, he’s camping in the wilderness, having hunted for his dinner the night before; and he’s a technophobe, adverse to telecommunications and society’s reliance on electronic devices. Need someone to track footprints? Clyde’s your man. Want him to access your phone’s GPS? Look elsewhere.

Nothing Short of Dying takes off at breakneck speed and doesn’t let up. There’s not much nuance, and though the plot moves at the speed of a bullet, it moves at the same trajectory from start to finish, and offers few genuine surprises or curve balls. But for readers seeking rock ’em sock ’em action, Erik Storey’s debut will surely satisfy. If the author is able to add a touch more stylistic flair in Barr’s second outing, we could be witnessing the launch of thriller fiction’s next big brand.