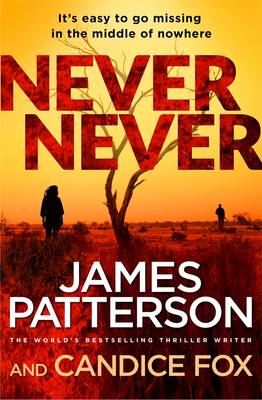 Candice Fox is one of Australia’s best and most innovative crime writers, so when her collaboration with multi-million copy bestseller James Patterson was announced, I was wary, simply because I couldn’t imagine their distinct styles coalescing. Patterson and his co-authors write fairly conventional thrillers, stripped to the bare essentials to ensure Patterson’s trademark rocket-fast pace. They’re fine-tuned, well-oiled machines, and provide plenty of readers precisely what they want. What has appealed to me about Fox’s work, however, is the complexity of her heroes and villains; her ability to find equilibrium between plot and characterization; and her willingness to explore dark societal underbellies, and portray violence realistically, without ever relying on sheer gratuity for shock value. My concern with Never Never was that the Patterson trappings – which I respect, and do not disparage – would dilute the traits I most admire her work for.

Never Never begins shortly after the events of the ‘Bookshot’ Black and Blue – though readers who’ve not read that novella needn’t worry, as that was quite evidently an interlude, with little resonance on this full-length story. Harriet Blue – a detective working sex crimes – has just learned her brother her brother has been arrested for a series of brutal murders around Sydney. Her superiors want her out of the city immediately to avoid the inevitable media attention, so Harry is dispatched to Western Australia, to work a missing persons case deep in the outback. Three people have vanished from the Bandya Mine, and it’s her job to track them down and bring in the perpetrator.

Harriet Blue has the makings of a great lead for a long-running series. She’s tough-as-nails, a capable brawler, and has that never-say-die attitude integral to a resonant protagonist. Presumably she’s an intelligent woman, too – though you wouldn’t know it based on her choices here, or the bumbling nature in which she runs her investigation. Harriet is purely reactionary, and continuously falls into perilous scenarios, never once being granted the opportunity to showcase her street smarts. This means there are plenty of rousing set pieces that’ll get readers’ hearts pounding, but not once does it feel like she’s cognizant of her situation. It’s impossible to delve into specifics without giving away spoilers, but Never Never is essentially Harriet stumbling headfirst into trouble before the ultimate villain reveals himself. If I’m ever attacked by a group of thugs, I’d want Harriet Blue in my corner. If confronting a cryptic crossword, I’m not so sure.

Events in Never Never are contrived. There’s very little organic about its development. It all feels very rote. Readers looking for a purely orthodox thriller will be sated, but those who’ve lapped up Candice Fox’s previous books, or indeed 2016’s landmark Australian crime novel by Jane Harper, The Dry, mightn’t feel the same. Sure, there’re some thrills, and some kick-arse moments for Harriet; but where’s the spark?

My thanks to Random House Australia for providing a review copy.