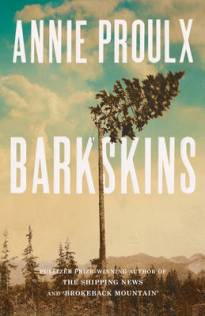 Annie Proulx’s Barkskins is enormous in size and scope. A vast multi-generational and ecological saga, it will, I imagine, be a rather divisive tome. Few won’t appreciate its lofty aspiration – to chronicle the world’s deforestation from the perspective of two distinct bloodlines – but some readers might be turned off by occasional sterile characterisations, which is perhaps an inevitable repercussion of the novel’s ambition.

Proulx’s writing is beautiful and uncomplicated. The narrative unravels gracefully – a miracle, given the sheer number of personalities that fill these pages – but there is an overriding feeling that Barkskins’ greatest accomplishment is its streamlining of historical fact rather than its story. Several times during our reading a fellow bookseller and I would gather and discuss the hardships that faced our predecessors, and marvel at their ability to survive and thrive. We’d shudder at some of the grisly deaths that ended their lives. And we’d debate the ecological crisis afflicting our planet. But never did we discuss specific characters, simply because besides a couple of standouts, few are given the time needed to become full-fledged and memorable personalities.

That being said, Barkskins is a novel I couldn’t put down. I was entranced by the three-hundred-year progression of the Sel and Duquet families, despite their overriding blandness as distinct characters, and never once found the ecological message sanctimonious. Don’t let its enormity put you off – Barkskins is eminently readable and a true literary feat.

One thought on “Review: Barkskins by Annie Proulx”