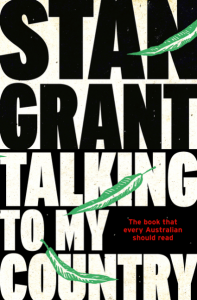 I would like to think I am mindful of Australia’s indigenous population. Not just of their history – our history – and the hardships they’ve faced, but of the continuing difficulties and obstructions prohibiting our fellow Australian’s from reaching their potential; from having the same fundamental opportunities most of us have available and take for granted.

But the truth is, as a twenty-eight-year-old white man, living comfortably, with my books piled high beside me, large collection of blu-rays shelved behind me, and my Xbox One whirring in the corner, their plight doesn’t come to mind as often as it should – as it needs to. I must hold my hand up and say I’ve been ignorant. Because I don’t see it, because I’m not faced with their bleak reality on a daily basis – partly because I don’t go looking for it, also because it’s not really reported, not like it needs to be – I’ve become desensitised, almost oblivious. That’s why Stan Grant’s Talking To My Country is so important. That’s why it is essential reading. It cuts out the bullshit, and it just tells it like it is. Grant tells us what our country was, and what it has become. It’s passionate, but it’s not preachy. This isn’t a sermon. And that’s why it’s so effective. Grant is not telling us what to do; he doesn’t pretend to have the answers. He is simply laying out the facts and pleading with us to start working together to find a solution. Because we cannot allow this to go on. The facts are damning. And while we can never make up for the sins of our past, we should be doing everything in our power to repent and ensure we cease making the same mistakes again.

The sad fact is, other Indigenous people voiced the same concerns, and highlighted the same uncomfortable truths as Grant, and I’ve not heard their words. I have no defence; I can only plead ignorance. My hope is that more Australian’s recognise Grant from his decades on our television screens and dip into his short, powerful book. I can emphasise this enough: it’s not a diatribe. It’s hopefully a conversation starter. Something to ignite a fire in the mainstream and get people talking, and turning that dialogue into something tangible. We all have our part to play. Even if it’s just putting Talking To My Country in the hands of another person, it’s a start. It’s something.  We’ve been stagnant too long. I certainly have been. It’s time to take notice; to recognise our mistakes and hopefully be part of the movement that makes amends.

Stan Grant’s Talking To My Country is poignant and powerful. Like it says on its cover, it’s the book that every Australian should read. How else will you be part of the conversation?