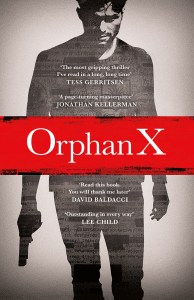 Gregg Hurwitz’s Orphan X is an unapologetic action-packed thriller — the kind that would’ve made Robert Ludlum proud —and is a promising start for what will likely be a long and successful series.

Evan Smoak is the titular character, Orphan X; a highly-trained professional assassin, plucked from an orphanage as a boy and trained to James Bond levels of badassery. But, as heroes are prone to do, Smoak turned against his programming and escaped their clutches, choosing instead to utilise his skills to help those in dire straits. It’s serious clandestine work, and as such, Smoak doesn’t have anything resembling a social life. He lives in an apartment complex, in a unit that makes the Batcave pale in comparison, and waits for his phone to ring. Because that phone call is Smoak’s Bat-Signal.

Hurwitz quickly establishes Smoak’s skills, and soon throws his life into chaos: not just because his latest mission has gone sour, with potentially devastating consequences for himself and his client, but because he’s allowed the real world to seep into his violent one, as he forms a relationship with a woman and her son residing in his building. For the first time, Smoak is breaking his commandments, and there’s a cost to pay for that.

Orphan X is high-octane stuff, and once Hurwitz steps on the gas he doesn’t let up. There’re cool action set-pieces – the finale in particular, a one-on-one hand combat extravaganza, is expertly choreographed – and there are twists and betrayals that are genuinely surprising. Its only problem is the overarching plot is a little formulaic; anyone who has read more than a dozen thrillers will be familiar with the set-up of the assassin turning against his masters, and while Hurwitz does it better than most, there’s still a slight feeling of uniformity. That said, one gets the feeling that aspect doesn’t necessarily have to be the driving point of future instalments. Orphan X reads very much like an origin story, and now that Smoak’s background has been dealt with, Hurwitz is free to have his protagonist tackle an eclectic mix of threats. Bring it on!

Orphan X is the kind of page-turner that begs to be read in a single sitting. Gregg Hurtwitz’s latest is more than just filler while you wait for the next Reacher, Bond or Matthew Reilly novel. This is an author who has levelled up, has improved book-after-book, and is establishing himself in the big leagues now. The other guys should be looking over their shoulders.

One thought on “Review: Orphan X by Gregg Hurwitz”