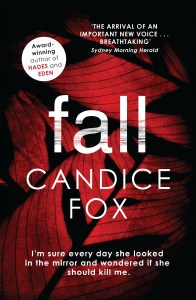 With her first two novels Candice Fox carved a distinctive square on the map of contemporary crime writing. Taut with suspense, well-oiled plot mechanics, explosive bursts of violence, and chockfull of surreal, yet somehow relatable characters comprised of a plethora of doubts, anxieties, and hidden darkness, Hades and Eden made it abundantly clear: Fox is an enormously skilful writer, and unquestionably Australia’s hottest talent operating in the genre today. Now comes Fall; polished and primed, it is a stylish, explosively tense thriller. Somehow, Fox has upped her game. This is, quite simply, crime writing of the highest order.

Fall is a culmination of plot threads from Hades and Eden, but new readers needn’t worry: Fox dexterously feeds the essential backstory, in a nuanced fashion that won’t leave veterans bemused. Detective Frank Bennett is still struggling to cope with the knowledge that his partner in the Homicide Department, Eden Archer, moonlights as a serial killer. Her targets might be society’s underbelly, but no matter how you look at it, it boils down to cold blooded murder. Thankfully there is work to keep Frank distracted, and a new case is quickly thrown into his lap. Someone is targeting Sydney’s beautiful people; nabbing joggers from the city’s premier parks and leaving their bodies for the police to find. Meanwhile, Frank’s girlfriend, Imogen Stone, is closing in on Eden’s true identity, determined to uncover the truth for fame and fortune. But when another damaged soul becomes aware of Imogen’s secret investigation, her plans go awry very quickly, and there is more than just her life on the line.

Candice Fox’s storytelling takes no prisoners. This is a novel fuelled by pure adrenaline and hidden agendas rather than a traditional whodunit in the mould of, say, Michael Connelly. It’s a pyschothriller; Fox digs deep into her character’s psyches, exposing them at their rawest, while propelling them headlong into danger. It’s a novel that has plenty to say about society’s stance on women and beauty, but it doesn’t get bogged down in its messaging. First and foremost, Fall is a thriller, and a fine one at that. Every page crackles with energy; every chapter ends on a note demanding the next page be read.

Fall will most impact those who’ve been with Eden Archer and Frank Bennett since the beginning. Though these characters have only been with us for two preceding novels, their history has weight and meaning, and it is fundamental to the novel’s gut-punch of an ending. That’s not to say the novel is burdened by continuity; far from it. Fall will surely leave even new readers gaping, and screaming at their ceilings, “How can it end like this?!” But for those of us who were there from the start?Damn. It’s wonderful to read a series that feels like it has direction rather than spinning its wheels. No doubt, Candice Fox could’ve produced several whodunits starring her conflicted protagonists, Frank and Eden. No doubt they’d have been good, too. But Fall propels their story to the next level, when its least expected. Just when you think there’s a status quo to become accustomed to, Fox pulls the carpet out from under her readers. And it doesn’t feel cheap – it’s earned.

Relentlessly fast-paced and beautifully structured, readers will bomb through Fall in no time and enjoy every second. If you haven’t read Candice Fox before, jump on the bandwagon now. This feels like her breakthrough book into the mega-sellers.Fall is that good.