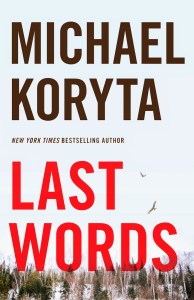 The perennially sublime Michael Koryta delivers an uneven series launch with Last Words. While the eerie, claustrophobic scenes deep inside Garrison’s massive cave are an obvious highlight, demonstrating Koryta’s extraordinary ability to create moments of pulse-pounding tension from natural environs, the overall plot is a tad uninspired. Well executed for sure, and a definite page-turner; just lacking the spark of, say, Those Who Wish Me Dead.

Markus Novak has been dispatched – banished, really – to Garrison, Indiana to asses a cold case he’s certain his boss has no intention of taking. He knows his superiors just want him out of the office while his future is discussed. Novak is a private investigator for a Florida-based Death Row defence firm, and was a good one, until the murder of his wife two years ago. That case still unsolved, Novak’s life has become one arduous downward spiral, to the extent he’s flirted with less-than-legal means to avenge her death. The case in Garrison – a decade-old cold case involving a dead girl found inside an elaborate cave system by the inscrutable Ridley Barnes – is designed to get Novak out of the way and take his mind off matters at home. But its hooks soon sink deep into his skin: how can Ridley Barnes have no memory of that night? Why is the town’s Sheriff so desperate for Novak to leave? And when Novak himself ends up drugged, and trapped naked inside the same cave system the girl was found in ten years earlier, it becomes personal. Novak won’t stop until he discerns the truth about this small town, and the events of a decade ago.

Koryta evokes wonderful imagery and tension when his characters explore Garrison’s caves. The terror of losing oneself in pitch darkness is intense; so too the realisation that one is beginning to experience the onset of hypothermia. These scenes prove to be the novel’s foundation; it’s unfortunate that the rest of the plot can’t reach the same level. There is nothing technically wrong with the narrative; but the whole ‘outsider comes to town to investigate its hidden past’ shtick has been done to death – and Koryta’s take feels perfunctory rather than innovative.

Last Words leaves the obligatory plot threads dangling for its sequel, and while Markus Novak isn’t a particularly noteworthy protagonist, he deserves a second round to validate his place in the vast echelon of private eyes.  This isn’t Michael Koryta’s finest, but his storytelling remains top-notch, and he remains a cut above the competition.