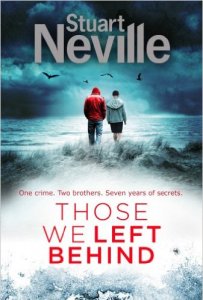 While most crime writers sate themselves with the unfolding of a crime, its investigation and eventual resolution, in Those We Left Behind, Stuart Neville looks beyond those perfunctory elements of the genre. The crime has happened; arrests made; sentences served. This is about what happens afterwards; about attempted reintegration into society; about the darkness that gestates inside the truly evil; about the everlasting ripples of a devastating crime. It is a truly sublime crime novel – deeply affecting and chilling – and one of the finest psychological thrillers of the year.

Years ago, when Serena Flanagan was a Detective Sergeant, she took the confession of a twelve-year-old boy named Ciaran, who claimed responsibility of the murder of his foster-father. His older brother, Thomas, was convicted of being an accessory, but Flanagan was always believed Ciaran took the fall for her brother so Thomas would receive a shorter sentence. Although her exchanges with Ciaran were brief, Flanagan is adamant they were meaningful; there was something between them, an undefined connection – and the young boy felt it too.

But that was long ago, and Flanagan, now a DCI, rarely thinks of the Devine brothers. Such is the way of a police detective, there is always another case, another crisis; something. But when probation officer Paula Cunningham – tasked with helping Ciaran re-enter society two years after his brother’s release – gets in touch with Flanagan to discuss the case, her interest in the case is reignited, and she finds herself drawn back into the anomalous relationship between Ciaran and Thomas Devine; determined to know the truth.

Focusing a novel on underage, convicted killers is a brave choice, and won’t be to every reader’s tastes. It makes for some uncomfortable and disturbing moments, but Neville’s exploration never feels gratuitous. The storytelling is nuanced and affecting rather than exploitative. Indeed, so many of his characters are flawed, damaged individuals; Flanagan and Cunningham might be the novel’s ‘heroes’, if one was to view the Those We Left Behind from a purely superficial level – but they carry plenty of baggage.

A deep, multi-layered crime novel, Those We Left Behind is a true hallmark of the genre. Stuart Neville is a cut above the competition.

4 thoughts on “Review: Those We Left Behind by Stuart Neville”