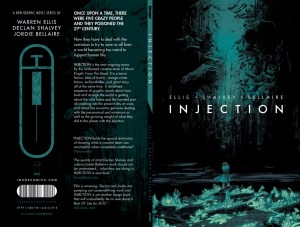 Years ago, five agents of the British government – each a genius in their specific field – created something called the ‘Injection.’ In doing so, they poisoned the world – reality itself – and are now dealing with the horrific consequences of their experiment. Bizarre, toxic aberrations are forming on our planet; these people are our only hope.

Blending elements of folklore, technology, history and science fiction,Injection is part sci-fi epic, part procedural. In typical fashion, Ellis presents plenty of theory and cool concepts – fantastically depicted by the super-talented Shalvey – but doesn’t offer a full explanation for transpiring events; that will surely come, later. For now, this first volume hooks the reader with stunning art, dangling plot threads – a hint of grander danger to come – and the five protagonist’s unlikely allegiance. As brilliant as they are – super-smart, extraordinarily talented – they aren’t infallible. Each of them possess demons, not all of which are explicated in this volume, but suggests saving the world won’t be run-of-the-mill. Indeed, their damaged psyches might prove their greatest obstacle.

Shalvey’s art deserves superlatives; all of them, in fact. He is unrivalled, stylistically; and partnered with colourist Jordie Bellaire, his illustrations have never been so striking. He is a perfect artist for Ellis; equally capable of keeping readers’ eyes glued to the page during character conversations, as he is blowing minds when he’s able to cut loose and portray the deadly aftereffects of the Injection.

Its first volume suggests The Injection will earn a place in Ellis’ Greatest Hits. There’s a long way to go, of course – lots of loose ends to tie together, characters to develop further. But what a launch!