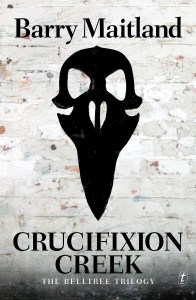 Still haunted by the suspicious car accident that killed his parents and left his wife blinded, Belltree is faced with another family crisis when his brother-in-law, Greg, is stabbed to death. Forced off the case because of his personal connection, Belltree goes off-grid and discovers Greg’s death is connected to several others; and that each victim had ties to shady forces within the highest echelons of the state government. Fuelled more by the desire for vengeance rather than a desire to expose the truth, Harry breaks all the rules as he goes to war with his opponents.

Crucifixion Creek is a rip-roaring, action-packed read; the kind perfect for an airplane, or a day at the beach, when page-turnability is essential. Its raw pace comes at a cost, however: the characters are facsimiles with little depth, and the plot surges forward on coincidence rather than ingenuity. That said, Crucifixion Creek is merely the first of a trilogy, and it’s reasonable to assume that complexity and emotional resonance will come as Harry Belltree’s story continues.

This isn’t vintage crime fiction, but it packs plenty of pulse-pounding excitement to keep you up way past bedtime. Bring on the sequel!