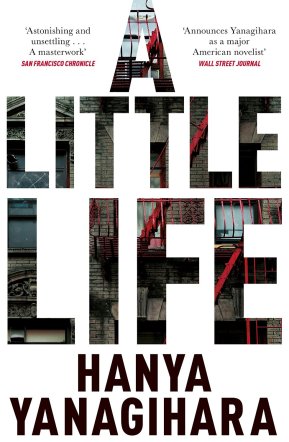 The favourite to win the Man Booker Prize later this month, Hanya Yanagihara’s second novel charts the life of the physically and emotionally scarred Jude St Francis, and the friends who desperately try to stand between him and the “hyenas” that torment him. Heartbreaking and unsettling, but beautiful and enthralling, A Little Life is a haunting novel about friendship, and the everlasting legacy of abuse.

When we meet Jude and his three friends – Willem, Malcolm and JB – in New York, they have just completed their studies and are embarking on their professional lives. They are impossibly bright men, each with their own singular aspirations, and each attain an extraordinary level of success over the course of their lives. In this regard, A Little Life is especially fascinating; I am accustomed to novels of such scope focusing on characters who struggle through their youth, desperately scrounging for dollars as they work towards their dream. And while the novel touches briefly on this period of their lives, A Little Life isn’t about monetary sufferances; in fact, Yanagihara flaunts the riches of her characters on several occasions, almost to the point of making them unrelatable, and at times unlikable. But there’s a point to this, their overzealous expenditure as they reach their zenith of success: for it highlights that, no matter how successful one might appear, regardless of the treasures they’re surrounded by, one never knows the depths of their pain and shame; one never knows the decrepitude of their subconscious. How many people around us merely put on a brave face? How many people, charming in public, exuding a confidence we can only envy, are living in surreptitious despair?

The mystery of Jude’s misery is the narrative engine that drives A Little Life, and this is revealed, slowly and methodically, in a variety of cutaways to his younger days, as the novel proceeds at an ambling pace. Jude has suffered so much, it might border on parody were it not for Yanagihara’s uncanny ability to imbue empathy from these would-be caricatures. The author throws so much at Jude, which he survives, though barely, and then suffers through the resonances of his experiences, which come to life in the form of the almost-weekly slicing of his wrists, and his refusal to recognize his life’s accomplishments; not to mention the physical consequences. Jude’s abuse overshadows everything. It taints his successes and accentuates his failures. It is something he can never outrun and never forget. It rules him.

A Little Life proves the value of friendship, but on the flipside, its hollowness. It will make you grateful for the friends you have, and mournful for the friends you’ve lost. It underlines the importance of love in our lives, even as it demonstrates that it is sometimes not enough. It’s a sobering read, and a powerful one. It won’t be to everyone’s tastes, but without question, it’s worthy of its place on the Man Booker shortlist.