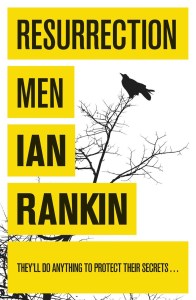 When DI John Rebus hurls a cup of tea at his superior and ex-lover Gill Templar, he is sentenced to purgatory in the form of Tulliallan; the Scottish Police College, where rookies learn the ropes, and senior offices are offered a final shot at redemption. Embarking on a team behaviour course led by DCI Tennant, Rebus is introduced to five anti-authority types, who put his own exploits to shame: Tam Barclay, Allan Ward, Francis Gray, Stu Sutherland, and Jazz McCullough. Together, they are tasked with investigating the long unsolved murder of Eric Lomax – a case Rebus has intimate knowledge of. Coincidence? Rebus doesn’t think so. Because he, too, is a chess piece in a game being played by his superiors…

Back in Edinburgh, newly-promoted DS Siobhan Clark has been assigned the case Rebus left behind: the murder of art dealer Edward Marber, who has ties to Rebus’s nemesis, Ger Cafferty. The case isn’t quite as open-and-shut as the evidence might suggest; but with Siobhan having acquired a taste for promotion, will she comply with the wants of the powers-that-be, or dig deeper to expose the truth, as her mentor Rebus was so prone…

Ian Rankin writes the most inventive crime novels, and Resurrection Men is no exception. Atmospheric and engrossing, the novel throws Rebus and Clarke into choppy waters and teases salvation, only to plunge them in deeper, taunting them; for the reader, it’s delightful. Put simply, it’s another darn fine crime novel, and earns Rankin another star against his name.