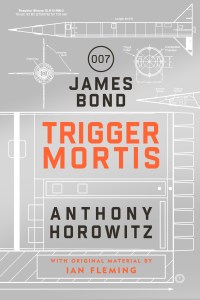 With Trigger Mortis, Anthony Horowitz has joined the prestigious league of writers who’ve succeeded Ian Fleming in writing about the exploits of British Secret Service agent 007. Like those before him, Horowitz has crafted a fine thriller that encapsulates the essential James Bond ingredients – the audacious plot, the rip-roaring pace, the maniacal villain(s), the exquisite women, the fast cars – but it lacks that special something, that secret Fleming Factor, which catapulted his secret agent into the stratosphere and made him one of the eminent characters of spy fiction. Alas, perhaps that Fleming Factor dissipated with the author’s untimely passing in 1964, lost to the ether, its precise reclamation impossible.Trigger Mortis, at least, has the right meat on its bones; it just hasn’t been cooked quite the same way. Still, it’s a tasty treat.

The 007 novels written by Kingsley Amis (writing as Robert Markham), John Gardner, Raymond Benson, Sebastian Faulks, William Boyd and Jeffery Deaver were all set, continuity-wise, in the years after Fleming’s death. Benson and Deaver in particular brought Bond into the present day, contemporising his world, for better or worse; my view has always been that Bond is a man of his time, and attempts to modernise him have served only to strip away his appeal. Trigger Mortis, however, is set between Fleming novels; its events occur mere weeks after Bond foiled Operation Grand Slam in Goldfinger, and features many references to past cases and characters. Fleming never shied away from mentioning Bond’s adventures of yesteryear in his novels, and it’s nice seeing Horowitz do the same. I was stunned one character in particular from Goldfingermakes more than just a cameo.

SMERSH is once again Bond’s opposition, and in this instance its face is Jason Sin, a survivor of the Korean War, whose nefarious scheme aims to decimate the United States’ space program and ensure supremacy for the Russians. Before that, there’s the small matter of SMERSH’s insane plot to eliminate a champion British Grand Prix racer, which sees Bond placed behind the wheel of a motorcar the likes of which he’s never experienced. And meanwhile, leftover forces from a previous case have targeted Bond for termination. Thankfully, Bond isn’t alone in his quest, and it’s great to see “Bond girl” Jeopardy Lane playing a role beyond femme fatale or hostage.

Fleming’s knack for nailing the details of place and time made his thrillers resonate. They are time capsules of the mid–fifties early sixties, and though Horowitz makes a grand effort to ground Trigger Mortis in 1957, it shows that the author himself didn’t live through these times; the details are there, but it’s textbook rather than nuanced. It doesn’t distract, but it does mean the narrative lacks that distinctive Fleming flavour. Of course, Horowitz is a masterful storyteller in his own right.Trigger Mortis is certainly layered with Fleming’s inflection, but it’s Horowitz’s interpretation rather than impersonation; there is a distinction, and the author has leaned the right way,

I tore through Trigger Mortis in a matter of hours, and loved every moment. Readers who’ve yet to sample Fleming’s work would be wise to sample Horowitz’s offering, then delve back into the original work. This is pure, undulated escapism. The stunts are crazy, the plots are implausible; and that’s precisely what James Bond is all about. Veteran Bond readers shouldn’t dismay that Fleming’s work has yet to be matched. It is an impossible task; he was a writer without equal. Instead, rejoice in the fact that this latest James Bond adventure perfectly captures why we love 007. Some brilliant writers have helmed 007 novels in recent years; most recently Sebastian Faulks, Jeffrey Deaver and William Boyd, a trio of which produced three solid, entertaining yarns. Horowitz has joined esteemed company, and he should be gleeful, for he has proven the best of them.