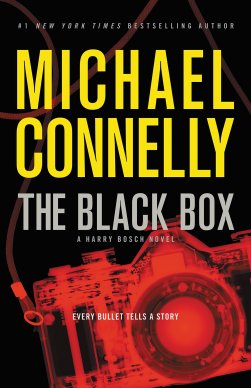 A promising beginning devolves into a solid, but unspectacular mystery starring the dogged Hieronymus “Harry” Bosch.

Los Angeles has always played an important role in Michael Connelly’s novels; the Rodney King riots in particular. The Black Box begins in 1992, in the midst of the chaos. Bosch is assigned to an emergency rotation in South-Central, called out to various crime scenes and initiating the barest beginnings of an investigation into each crime of the danger involved operating in the vicinity. One crime in particular has always resonated with Harry, even twenty years later: a murder victim he christened ‘Snow White.’ Called to an alley off Crenshaw Boulevard, a squad of National Guard troops have found the body of a white woman, executed by a bullet to the head, who is eventually identified as Copenhagen journalist Anneke Jespersen.

Twenty years later, Bosch lands the case once again as part of his work with the LAPD’s Open-Unsolved Unit. But the higher-ups don’t want the case solved. The repercussions of doing so – solving a white woman’s murder – are unthinkable for the city’s politicians. Of course, when has Harry Bosch ever allowed bureaucracy to sway him?

The Black Box begins strongly; taut and tightly-plotted, with Connelly deftly elaborating on Bosch’s investigatory moves, and dipping into his personal life; namely his relationship with Hannah Stone, and his daughter’s continued determination to follow her father’s footsteps into law enforcement. In fact, until the novel’s climax, The Black Box is right up there with Connelly’s best. But its conclusion is overblown and exaggerated, relying on unnecessary theatrics that come across a tad cheap; the success of the Bosch novels was always the mystery, not over-the-top action. Still, this one’s enjoyable; it’s just not Connelly’s finest.