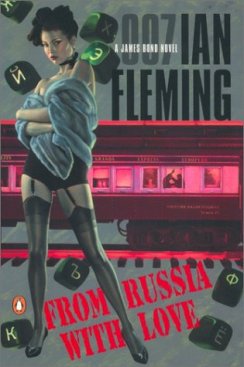 James Bond played a vital role in the defeats of Le Chiffre (Casino Royale), Mr. Big (Live and Let Die), and Hugo Drax (Moonraker). In doing so, he has made himself the grand nemesis of SMERSH, the Soviet counter-intelligence agency; and they have plans for him. A simple assassination job lacks the necessary grandeur; SMERSH doesn’t just want 007 dead, they want him discredited, and the British Secret Service’s reputation tarnished. Their plan is a convoluted one, involving many pieces, including a psychotic killer, a beautiful Russian cipher clerk, and a Soviet decoding machine: the Spektor. Its depiction, from inception to activation, forms one of Ian Fleming’s finest novels: From Russia With Love.

Until this point, the Bond novels had followed a certain formula, which worked to aplomb for the most part, but after four episodes risked going stale. From Russia With Love smashes readers’ expectations from the off: its opening pages are told from the Soviet perspective as they form their plan, and its various personnel are pulled into the fold. Remarkably, Bond doesn’t make an appearance until sixty or so pages. When he does, the contrast between 007 and his Russian enemies couldn’t be starker: Bond is a killer, no question, but he has an appreciation for life and the beautiful things in it. That’s what makes him moderately relatable.

When SMERSH’s plan comes to fruition, Fleming ups the pace, distilling its unfolding into two-hundred concise, rip-roaring pages. Darko Kerim is the boisterous (and highly misogynous) head of the British Service’s Turkey station, and Bond’s ally in Istanbul, who fills Bond’s time with adventures until the Russians make their move. When they do, and Tatiana Romanava enters the fray, the action shifts to the Orient Express. The scenes here, encompassing their long journey to London, are thrilling: there are enemy agents on board, and the veracity of Bond’s female companion remains questionable.

Though the Bond novels have always formed part of a cohesive series, with one novel following on from the other, From Russia With Love ends with a true cliffhanger.  Hindsight limited the effect of this, but imagine what it must’ve been like at the time! Readers would have to wait for Doctor No to discover Bond’s fate . . . and I’ll be diving into that old favourite very, very soon.

2 thoughts on “Review: From Russia With Love by Ian Fleming”